Why did they break their cups after a toast?

In episode 17 when they're about to welcome Satsuki's mother, they're having a toast and slam their cups to the ground. Why did they do it? Does this have anything to do with Japanese culture? 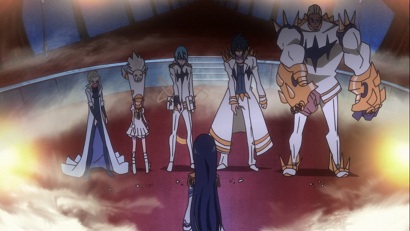 It's from a Russian tradition that went back to Peter the Great and now it's done after important toasts.

A legend says that the first known faceted glass was given as a present to Tsar Peter the Great from a glass-maker called Yefim Smolin, living in Vladimir Oblast. He boasted to Tsar that his glass couldn’t be broken. Tsar Peter liked the present, however, after drinking some alcoholic beverage from it, he said loudly Let the glass be! (Russian: Стакану быть! - literally the glass be), threw the glass on the ground and managed to break it. But Peter didn’t punish the glass-maker, and the production of such glasses continued. According to the legend, people present during this episode misinterpreted the Tsar’s words and thought that Peter called to break the glasses (Russian: Стаканы бить! - literally beat glasses or break glasses), that’s how a tradition of breaking drinkware on certain occasions appeared in Russia. Glasses were broken after especially important toasts or just during the especially cheerful parties. Russian restaurants even held a special prices for breaking the glasses. Breaking of drinkware, or, in wider context, any tableware, is believed in Russia to bring luck and happiness.

I'm sure Jon Lin is correct about the background, but here is a more in-universe answer:

As user1306322 stated in a comment, it's likely based on a ritual done before going into a battle you don't expect to return from. In episode 23,

they toast again, but this time Satsuki says not to break the cups as that time they're not going to their deaths (in her words, approximately).

This leads to the assumption that when they toasted in this episode, they did not expect to return.

Another potential source, in addition to the already-mentioned sources and possibly influences by them, is earlier anime. Kill la Kill makes frequent direct and indirect references to earlier works, and this scene from a prominent 80's sci-fi anime Legend of Galactic Heroes could have been what they are referring to by breaking glasses.

Admittedly, this is hardly the first instance of Germanophilia or Semitophilia in anime or Japanese culture in general and its sources could be earlier.

This is based upon many light novels that I have read. Typically the breaking of the glass after a toast denotes a finality to whatever you are toasting. If you toast before parting you don't expect to see each other again, if you post welcoming someone into your family it implies a permanence to that acceptance.

I have also read in some that it is implied that "until this toast is undone (repair of the cups) this is permanent." So in this one story they break the cups at the beginning of a journey and repair them when them come home to toast again.

Breaking of glasses occurs twice in the yakuza film Tokyo Drifter (Suzuki, 1966), once in the formal introductory ritual between Tetsu’s and the northern boss (actually a dish of sake); and in the final scene where

Tetsuo breaks his oath of loyalty to his boss, symbolically crushing a wine glass in his hand.

Neither is a formal toast, and each involves only one party. However this (particularly the first ritual) is an example of breaking a drinking vessel in ritual fashion.

7
What did they use for their toast?

17
Why are cherry blossom so prevalent in anime?
7
What did they use for their toast?
2
Does "Moe Moe Kyun" mean anything?
1
In SAO 2 did Asuna break up with Kirito?
3
Why in World Trigger do the characters have times when their faces get blank during dialog?
7
Why are a lot of characters in anime and manga named after their mothers and not their fathers?
2
Why does Yuno paint her license plate yellow?
8
Why did Harime Nui's eye not heal?
6
Why do characters in anime/manga eat their lunches in restrooms?
1
Why do Nino and Miku need to fight for the TV?