According to the wiki, when a Shinigami dies, their remaining lifespan is given to the human they saved.

Shinigami who die are reduced to dust, and their remaining lifespan is given to the human they saved.

Since Rem killed L and Watari, she gained their remaining lifespans. Additionally she probably still had some lifespan left. On top of that Misa was already given a lot of lifespan from Gelus (from which she lost 75% again). So does this mean all of this lifespan is transferred to Misa Amane?!

Yet according to her wiki page, she dies in 2011 at the age of 26, only seven years after Rem died.

Does this mean that humans are also capable of reducing their own lifespans? Or would the author have made a mistake by letting Misa die as early as she has? I know she lost 75% of her remaining lifespan through the two eye deals, but you'd think that the cumulation of L, Watari and Rem's remaining lifespans would be greater than just one year, wouldn't you?

It isn't a plothole. There's a rule in the Death Note that specifically covers this. 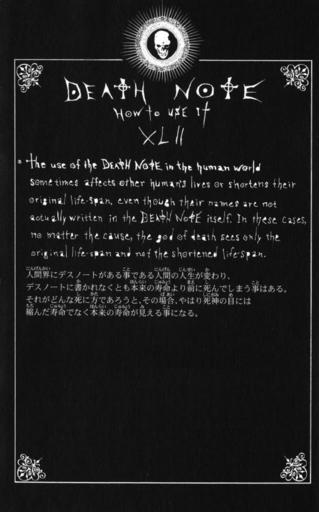 (Source: Volume 8 of the manga)

Short Answer: It doesn't matter how much time Misa gained from the shinigami, or how much she lost from halving her lifespan. Every time someone relevant to your fate is killed by the Death Note, the future changes and your lifespan is recalculated.

Misa was living for the sake of Light. Light was killed by the Death Note. It would have been strange if her recalculated lifespan hadn't been dramatically shorter than before.

The fact she died on Valentine's Day in the year following Light's death strongly suggests she committed suicide because he was dead. This is also shown at the end of the anime.

We see both of these examples take place with Misa. Her life had ended with the mugging, but she was indirectly allowed to keep living by the Death Note. Later, she had a long life ahead of her, but the Death Note indirectly gave her a premature death.

The best part of this rule is the last sentence: "In these cases, no matter the cause, the god of death sees only the original lifespan and not the shortened lifespan."

So basically, the lifespans that shinigami see aren't reliably accurate. They can only see the person's original lifespan. If the Death Note indirectly decreases someone's lifespan, that person's visible lifespan won't change.

This rule was most likely created by the author just to help ensure there wouldn't be any plotholes.

Note: This only holds true for the Death Note indirectly shortening people's lives. The user's original lifespan will still visibly decrease if they trade half their lifespan for shinigami eyes (as shown when Rem is reunited with Misa, as she is able to tell that Misa traded half her lifespan again). 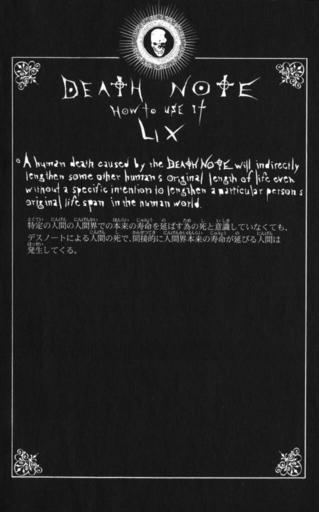 A human death caused by the Death Note will indirectly lengthen some other human’s original length of life even without a specific intention to lengthen a particular person’s original life span in the human world.

The rule about shortened lifespans, rule XLII, is the only rule which states that "in these cases" the shinigami can't see the correct lifespan. There is never any mention of this regarding lengthened lifespans.

I don't think we're told how many years Gelus or Rem had. Ryuk said that Shinigami were lazy and only write names now to extend their life, and doing more than that would be seen as "working too hard".

If we think about it, Shinigami might be sooo lazy that they might only extend their own life when they have very little time left, then find some young person to steal a few decades off from, that said it's possible that Gelus and/or Rem only had a few years left.

Also keep in mind that Rem died preventing Misa's death which L and/or Watari would have been the cause of, one could assume before Rem killed them Misa had little time left given L apparently had hard evidence to convict Misa, L probably could undeniably prove Misa was the second Kira in a week of so and see her incarcerated (possibly solitary confinement), from there she may have been executed or took her own life from being separated from Light, I wouldn't be surprised if that was in the space of a year or 2.

This is on the basis that a Shinigami does not gain any life when preventing someone's death, so L's lifespan was never taken by Rem to then be passed onto Misa. Watari, who I remember dying first, was old so he probably didn't have much time left anyway.

If you look when Misa sees L's lifespan, it is roughly 57 years by the equation on switching from shinigami time to human days/years so she would gain 57 years from L alone. Watari had about a year or two left.

When Rem sees Misa's life span after making the second eye deal it reads 56873. You divide that by 3556 and that's how many days she has left (just over 15.)

So by the theory that L and Watari's lifespan do not go to Rem, the author would be correct on the timeline.

Tbh I think it is kind of a plot hole because Rem actually specifies that from Gelus saving Misa her lifespan was extended far beyond a normal human.

I believe Near(N) used the Death note to kill MisaMisa. MisMisa had no knowledge that Light had died, and she doesn't seem like a person that would commit suicide. Near probable wanted to eliminate Misa for just in case, or as a punishment for being the second Kira.

Has no one considered the possibility that suicide is not a natural cause of death and therefore remaining lifespan is not affected by it? For example, a person that is supposed to die at 60 dies at 20 because of suicide, but at the time of death, their lifespan still reads that they have 40 years left. Or is there a rule in the Death Note pertaining to suicides?

29
What would happen if a Shinigami with exceedingly long life-span dies for a human?
7
What does the Death Note consider as "original lifespan"?

29
What would happen if a Shinigami with exceedingly long life-span dies for a human?
21
Couldn't Misa have told Kira L's life span?
5
Why was Ryuk tied to Light's Death Note?
10
Why did Rem kill L?
2
A plothole in Death Note The Last Name?
14
Is Ryuk required to write Misa's name in his Death Note at the end of her life?
10
In Death Note, how far could "sexual" interaction go with a shinigami before it broke rule XXXVI?
4
Why didn’t Rem die when she killed the criminal to save misa when she was in higuchi’s car?