What all abilities are transferred when hearts are interchanged between bodies?

Law's Ope-Ope No Mi gives him the ability to switch the hearts between 2 bodies. This is actually transferring the mind of a person to the other and vice versa.

So the question here is, which of the below abilities of the person are transferred along with the mind to the target body?

It'd be nice if specific incidents/instances can citied along with each of the pointers for reference as it would be easy to visualize and co-relate them with the answer.

A body's physical strength is not defined by its heart, but by the actual body. Therefore it is not switched, as we can see when Nami (in Franky's body) wants to beat Sanji (in Nami's body) again. Nami should not be able to even tickle Sanji, but if she would have hit him again in chapter 663, Nami's body might have been severely injured. 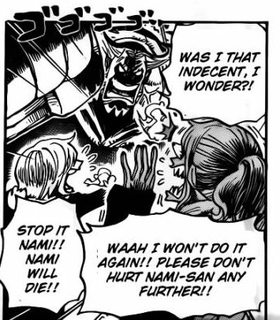 Mental strength on the other hand, does come from the heart as we can see Sanji do extraordinary things with Nami's body. Things she would physically be capable of, but not mentally. Like when Sanji blue walks his way to safety after rescuing Kin'emon's torso in chapter 672. 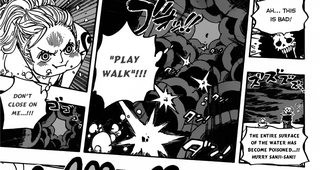 Devil Fruit Powers become part of the body after eaten, so the same can be said as with actual physical strength. For example, it was Luffy's complete body that became rubber and not his mind. Which was proven on multiple occasions. Oars couldn't use any rubber attacks on his own after he obtained Luffy's shadow. Tashigi could turn her body into smoke after her mind got switched with smoker's and Franky could still change Chopper's animal forms. With the last example, I would also like to point out that this is also a good example where mental strength is not switched, since Franky could not control Chopper's final form, while Chopper could, as seen on Fishman Island. I'm not saying Chopper is stronger than Franky perse, I'm saying that if mental strength and thus experience would have been transferred he would have been able to control the monster. 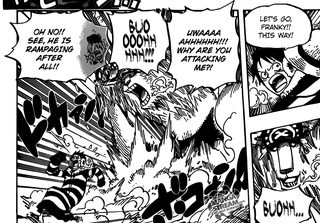 Haki obviously also gets switched, since this literally means willpower. So if the will gets switched, so will it's power. This can be seen when Sanji activaly uses Kenbunshoku Haki to locate Kin'emon's torso.

In the case of switched "souls", Devil Fruit powers are maintained within the original body, while voices and other abilities, such as Haki, go along with the switched mind/soul, as seen when Sanji used his Kenbunshoku Haki in Nami's body, due to Haki originating from the individual's spirit.

It should be noted that Law only switches the mind and not their actual physical hearts. This can be seen when he switches Tashigi and Smoke's mind, while holding Smoker's physical heart in his hand in chapter 663.

Otherwhise it would have been chaos if Caesar would have put Law's heart inside himself at Dressrosa, becoming Law.

It can't change. For example, Chopper and Franky were changed their hearts. In that case, Franky (in Chopper's body) can use all of Chopper's Devil Fruit abilities and Chopper (in Sanji's body) can't use his power at all.

It will change because Haki means willpower (power of heart).

I think it can't change. My example is Sanji (in Nami's body). He can't use his legs as well as in his own body and he can't run too fast for a long time because Nami's lungs can't bear.

They're only my views.

I try my best to get some references from wiki.

In following case, Tashigi (in Smoker's body) can use Smoke Smoke ability and her Haki is not very well and Luffy easily beats with Haki.

Tashigi confronts Luffy, demanding to know what he is plotting but Luffy easily dodges her smoke attack and pins her down using Haki wondering why "Smoker" got so weak. Smoker, seeing this, attacks Luffy from behind to Luffy's surprise that "Tashigi" got much stronger.

In following case, Sanji (in Nami's body) will not stand for a punch of Nami (in Franky's body). That shows strength doesn't change.

Sanji joyously introduces himself as Nami, ripping off his jacket and holding up her breasts, much to Brook and Usopp's pleasure. Nami goes in to punch herself, but is stopped by Chopper, saying she (meaning her body) will die.

8
What are the names and grades of Zoro's swords?
2
What skills introduced prior to the formal introduction of Haki are Busoshoku Haki based?

4
What happened in the fight between Zoro and Monet?
7
What are the differences between the One Piece anime and manga?
5
Why are all members of the Kuja tribe born as women?
9
What are the similarities between Gol D. Roger and Monkey D. Luffy? Are they related by blood? What are their relatives' ages?
2
What is the conflict between Sea and Devil Fruit?
2
What are Croquembouche?
1
What is the difference between Haki and Conquerors haki?
4
What was the relationship between Whitebeard and Roger?
3
What holiday is "Miss All Sunday" named after?
0
Why do Sanji and Smoker still need nicotine when not in their own bodies?