Ragyo Kiryuin in Kill la Kill anime has a number of scars along her back, that are shown in such a way it would make me think they are important. 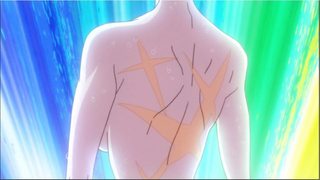 By the end of the anime, the scars are not shown to be important to the story. Does the anime miss something the manga has in regards to those scars? Is there something I missed?

She also has seven scars on her back that greatly resemble the stars emblazoned in Goku Uniforms. The origin of these scars is unknown, but they are likely a result of her fusion with Life Fibers.

It's very likely that this was a side effect of fusing with Life Fibers at early age.

The scars are almost exactly the same style as the stars that indicate a Goku uniform's rank. Remember what the stars actually mean? It's the percentage of the thread that's made of life fibers: a 1-star has 10%, 2-star has 20%, and a 3-star has 30%. The presence of the star scars on Ragyo is likely foreshadowing that she's a life fiber being. I only count 7 in the full shot, so either that specifically means that she's only 70% life fiber (having been corrupted by them when she was older rather than as a child like Ryuko or Satsuki), or the specific number is unimportant and the idea is that she herself contains life fibers, and at a higher percentage than any Goku uniform.

Not the answer you're looking for? Browse other questions tagged kill-la-kill .

12
Who exactly is Benjamin Anderson in the Kill la Kill soundtrack?
18
Why does Satsuki address everyone using "kisama"?
5
What links "Luluco Space Patrol" and "Kill La Kill"?
9
Is Senketsu eye patterns from Kill la Kill based off something?