After the War, many things changed with the Marine.

There are new unknown Admirals, but does anybody know what Sengoku's new position is?

(After timeskip, he doesn't seem very serious any more) 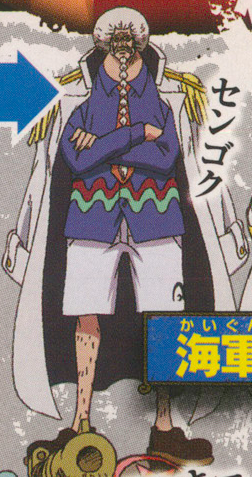 I found this in the Wiki:

Sengoku the Buddha was the fleet admiral of the Marines during the first half of the series. He was the successor of Kong and the predecessor of Sakazuki. He was also one of the major figures along with Whitebeard, Shiki, and Monkey D. Garp during the times when Gol D. Roger was still alive, and still continues to be in the present, even after his resignation from the Marines. Sometime during the timeskip, he became a General Inspector.

Does anybody know what "General Inspector" is?

The people writing the wiki on Sengoku just forgot to link the rank's name to it's corresponding wiki page, because if you read the wiki page on General Inspector you can read the following:

"General Inspector" (大目付 Ōmetsuke?) is a special rank which has the duty of detecting and investigating instances of maladministration, corruption, or defection in the Marine organization. The only known General Inspector at the moment is the former Fleet Admiral Sengoku. 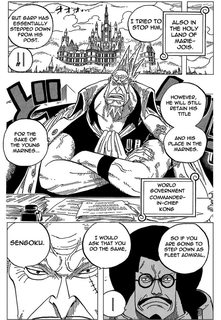 So I was wrong in my comment, thinking both Garp and Sengoku received the same rank. In chapter 594, as shown in the picture, Kong indeed suggests Sengoku to stay for the young marines, the same way Garp did. And according to the wiki Garp supposedly became an Instructor, while Sengoku became a General Inspector. Both cases have not been verified by the manga though.

3
What type of Devil Fruit did Sengoku eat?
8
How is Lola (a general zombie) able to do what she wants?
10
Why do all Marine Vice Admirals (and higher ranking officers) put their coats as capes?
3
Who is this gorilla that carried Sengoku on its shoulder?