Is Misa's suicide being caused by Light's death a flaw in the story?

In Episode 37, Light dies. Soon after that, Misa commits suicide. But I'm a little confused now, because of this rule:

Now, everyone knows that Misa will commit suicide if Light dies. But the death of a person whose name is written in the book can't lead to anyone else's death. So basically, Ryuk shouldn't have been able to kill Light, because if Light is dead, that will indirectly lead to Misa's death. So, have I missed something in Death Note, or am I right?

The title of this question is misleading, because "another flaw" assumes there was a first flaw. Death Note avoids plot holes more rigorously than perhaps any other series in existence. Whenever someone misunderstands or forgets some element of the storyline, they tend to think their misunderstanding must be a flaw in the story.

The rule you're thinking of is Rule XXVI. 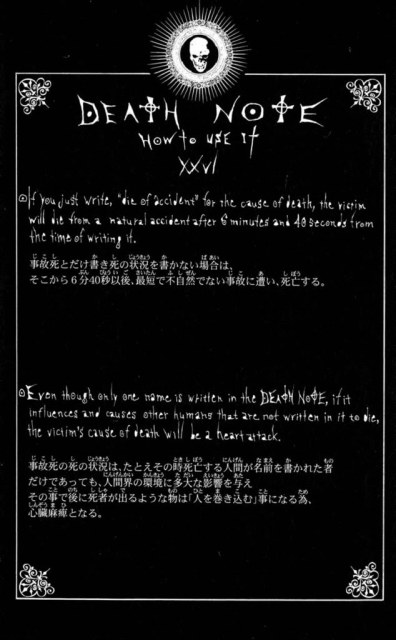 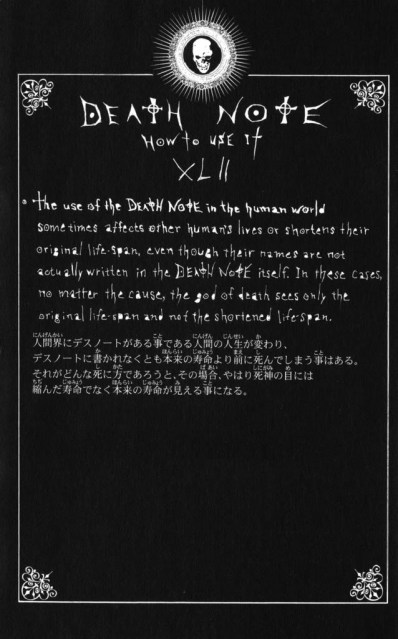 It spells it out here that killing a human with the Death Note can shorten the lifespan of other humans, "even though their names are not actually written in the Death Note".

Note: It's been a while since I watched Death Note, and it's not a series I've followed much afterwards, so feel free to correct me if I'm wrong. I have also only seen the anime.

There are two points to address here:

In Death Note, we see that Misa is fairly devoted to Light, in almost an obsessive way, but it's not completely clear if she's obsessed to the point where life would be completely pointless without him. We do see that she's fairly dependent on him, and to be honest arguing about whether or not she's that devoted to Light is slightly difficult, so it's easier to come to some conclusion by looking at the exact mechanics of the death note.

An example of something that wouldn't work would be:

In Misa's case, her suicide is somewhat indirect, so one could say that this rule doesn't quite apply here - I get the impression that driving the bereaved to suicide as a result of someone's death doesn't really count. (We should note that the influence that the Death Note rules talk about seem to be more "physical" and direct.) As stated by user1306322, Misa commits suicide of her own will here, which is also important here.

Technically, the death of Misa would make sense. Obviously, the writer thought of some possible loopholes in what he wrote which resulted in the line which may have either been said by Ryuk or Rem, that not even the shinigamis themselves know all the true potential/rules of the Death Note. I believe what the rule actually meant was that someone couldn't write a chain effect of death, it would be too much for the notebook to possibly handle and would make it too easy for people to wipe out a mass amount of others and make it seem like an 'accident'.

Obviously, there would be loopholes in the Death Note due to the fact that if you watch the series, shinigamis actually aren't aware of how humans act and are often bored without anything to do and sit around doing absolutely for years upon years, which is the reason why Ryuk 'drops his Death Note' (which didn't even belong to him.) If you really think about it, Misa's death makes perfect sense.

The action was hers and hers alone and she was not controlled. We often see throughout the series Misa being often mistreated by others and disregarded. She also went through an immense amount of trauma that was disregarded by everyone else and was kidnapped and blindfolded for days, so it would make sense if she has had symptoms of depression way before Light's tragic death.

Also, Light later in the series had fake rules written, so what's to say that there was once a tragic issue where many people were killed in a chain event and the rule was made up added to prevent it to happen again. And, technically from what we saw, Misa's name was never written so the rule would not count against her death to prevent it.

13
Is it possible to kill people indirectly with the Death Note?

13
Is it possible to kill people indirectly with the Death Note?
5
Why was Ryuk tied to Light's Death Note?
3
How can a death note shorten the lifespan of others?
12
Will a person die when their name is written in the situation of death?
2
If a Death Note user specifies, along with the actual target, the name of a person whose face the user doesn't know, will that person live?
1
Light's actions before hiding his death note
2
Could one make a specific person shoot someone dead using the deathnote?
1
Light's Search History Death Note
14
Is Ryuk required to write Misa's name in his Death Note at the end of her life?
6
Did Minoru die because of the Death Notes' new rule or because Ryuk wrote his name in a Death Note?