What is this anime about people turning into light? [closed]

I started watching this anime but I ended up closing the browser without writing it down as I had to leave and the history was cleared. All I remember was there was a high school boy walking along and narrating, and he said something like, "This was the day my world ended." As he said it, everyone around him turned into light and a giant baby started eating the light people, and there was a giant ball of faces. There was a girl with orange or brown hair with a sword who started fighting them, but the guy stopped her and she had to cut him from the shoulder to the hip to attack the monster. Then, when she had cut the giant baby and almost killed it, it turned into a small child and flew away. Then the girl started talking to a light near her or something.

Does anyone know what this anime is?

The two creatures discover that Yuji can move about in the Fuzetsu, and deducts that he might be a Mystes. Curious about his identity, one of the creatures grabbed Yuji and attempted to devour him... until a blade slices its arms cleanly off. As the gigantic baby doll cries in pain, Yuji finds a girl with blazing-red eyes and hair standing in front of him. Soon, she confronts the creatures in front of her and mercilessly defeats the two. The girl with blazing-red eyes soon ask about Yuji's existence, and like the creatures she defeated, a voice she refers to as "Alastor" assumes that he is a Mystes. Then, she attacks another creature; this time, it is in the form of a woman, and that creature mockingly identifies the girl with blazing-red hair and eyes as the "Flame-haired Burning-eyed Flame Haze of Alastor, 'Flame of Heavens'". As the Flame Haze is about to deliver the final blow, a confused Yuji goes in the way, and is instead attacked by the enemy. Leaving with no choice, the Flame Haze strikes her sword and tears a large gash off Yuji's shoulder, slicing off the enemy's arm in the process. Shocked by the attack he receives, Yuji falls to the ground as a small doll-like figure escapes from the scene. 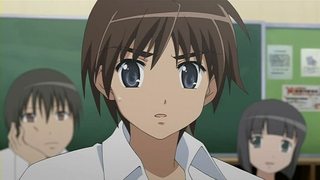 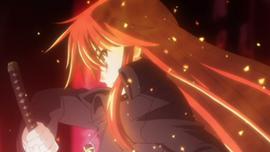 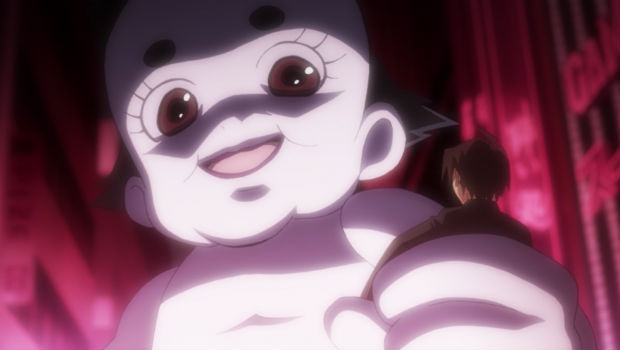 Also known as Shana of the Burning Eyes 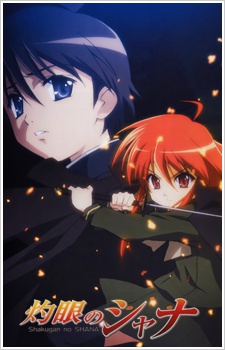 He had thought his normal days would last forever, until they were ended abruptly by an encounter with a girl with red hair and eyes. He named her Shana.

Not long after he enters high school, Sakai Yuji’s normal days come to an end. He sees something bizarre on his way home: people are frozen in a strange fire, and a monster that looks like a large doll is attacking them. Just when he's about to be killed, a girl in a dark cloak wielding a large sword appears, and slices the monster in half. Although Yuji survives the strange encounter, the girl informs him of a desolate truth: " 'You' don't exist anymore."

She calls herself a Flame Haze who hunts "Guze no Tomogara"; intruders from another world. She explains to him that he is a "Torch", a substitute of Yuji whose “existence” has already been devoured. She also told him that he is a special Torch, "Mystes", which contains a precious item in it. When he looks at his chest, he sees within himself a faint flame, just as she said.

It is in this way that his eternal struggle alongside the girl begins.

Not the answer you're looking for? Browse other questions tagged shakugan-no-shana or ask your own question.