Who exactly are featured on the walls of Maria, Rose & Sina?

I'm not sure whether this question will make sense or not but what is the symbolism or meaning behind the logos or symbols that are associated with the walls of Maria, Rose & Sina?

I haven't watched the anime in a while so whether it was revealed or not (I am not sure) however I am pretty sure they didn't address it. Does anyone know?

Until chapter 69, there has not been any mention yet of who Maria, Rose and Sina are in-universe. Neither has there been any explanation from the author as to who they supposedly represent. Though I have found this interesting interpretation as to what they might mean by kcwhitmore and gettingfitandstayingthere written on the snkconspiracytheories tumbler page. You can read it here or below.

First of all we have Wall Sina. The heartland of the civilization, the interior is an idyllic place, almost utopian in its bliss. This is accordance with the name ‘Sina’ which in fact means blessed. The reader/watcher was provided with a view into this blessed world when shown Pixis’ interactions with the government official. There was wine and food in abundance; beautiful rooms, buildings, and surroundings. This is in direct contrast to the outer most wall: Maria.

Even pre-attack, the interior of Wall Maria boasted none of the lavishness of the interior of Sina. This land was the outskirts of human domain with a scarce amount of food and other natural resources. The nature of this interior is reflected in the wall’s name; Maria means ‘bitter’. There is a decided bitterness to the life style within Wall Maria. Eren, Mikasa, and Armin did not grow up in a blessed land.

Finally we have Wall Rose. ‘Rose’ is a symbol for innocence, youth, and love. It is also the token symbol of many Great Goddesses, including Aphrodite. This love and youth and innocence is seen in Eren’s blissful ignorance as he declares the counterattack to have begun. For five years they lived in a tentative peace after the fall of Wall Maria. But that innocence was shattered by the appearance of the Colossal Titan once more.

The duality of a rose’s natures should also be considered when thinking of the Wall’s names. Rose’s though symbols of beauties are also dangerous because of their thorns. The walls as a whole function in this same regard. They protect the people, but they also keep them caged. There is a harshness to them despite the sanctuary they provide.

Overall the walls are, especially as considered by Wallists, three goddesses. These goddesses show truths of the world: there is bitterness (Maria) and blessedness (Sina)—a harsh duality (Rose) of the black and white society that are separated by the walls.

Huge spoilers, please read at your own risk.

There is a theory by yshabash on Reddit that seems to be less and less of a theory as more information is considered. At the end of Season 2 of the Attack on Titan anime, there is a scene featured in the ending credits. Here are two images featuring the scene, only separated because the camera pans down from top to bottom but both are the same scene.

First part of the scene features

what appears to be a member of royalty, though likely a King based on his wardrobe, and 6 members of what appear to be a noble class strictly based on the setting and their clothing. 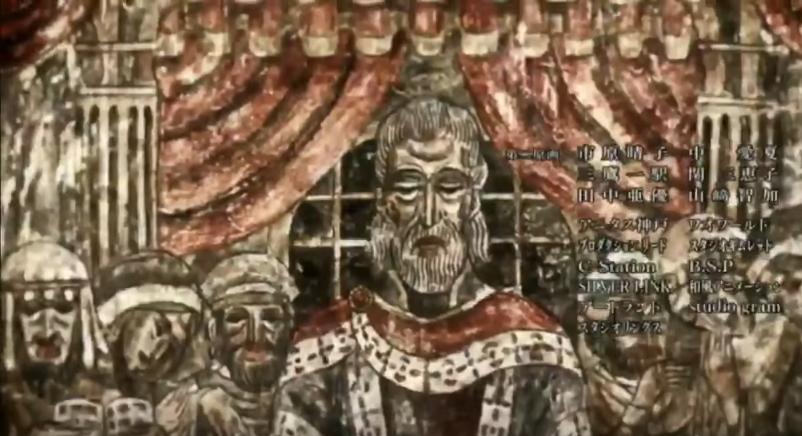 And the second part of the scene, as the camera pans down, features 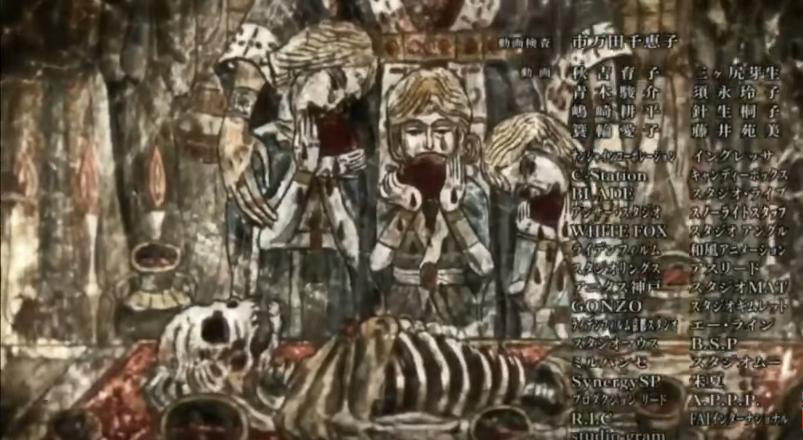 The theory then, by yshabash, is that

these three children are the iconic women featured on the crests of Wall Maria, Rose, and Sina.

If we were to examine this theory closer, the first place I'd start is

Now that we've established likely origins, let's consider the icons on each of wall which can be found here on the Attack on Titan wiki.

If you don't feel like scrolling, this is a screenshot of the applicable walls crests of Maria, Rose, and Sina. 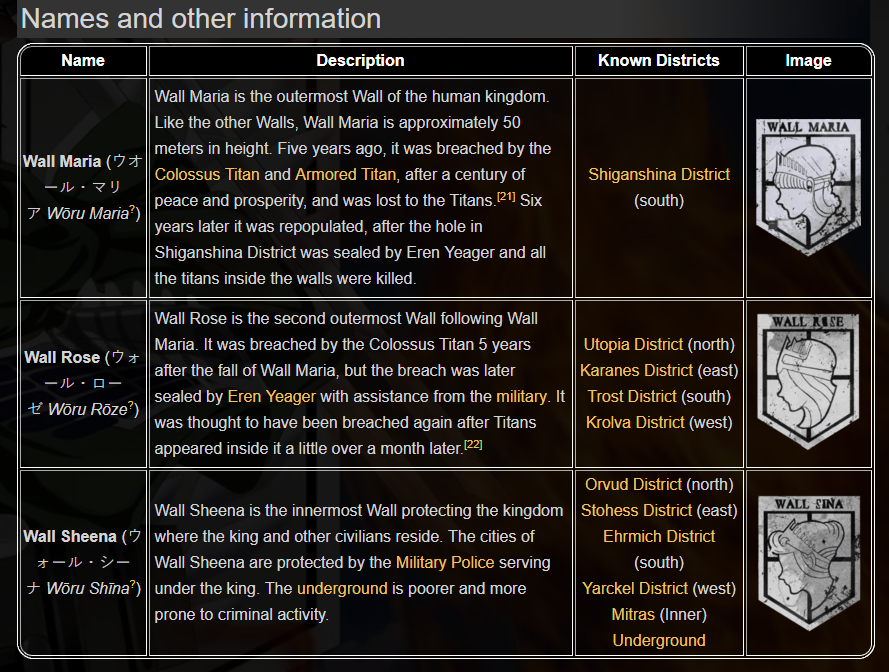 Up until this point, there have been zero sightings in the manga and anime of

three royal women, or even three royal girls, except in that previous scene in the ending credits of Season 2. And, all three girls in that ending credit scene look to be of royal or noble lineage.

I do not see it likely that

these girls in the ending credits scene built these walls but I do find it likely that the Eldians respected them enough to place their faces on the crests of each wall.

So the question then is why?

Going back to the ending credits scene, let's examine the skeleton of the body the girls are eating. It's not quite human, but not quite titan either. The skull takes on a very strange structure towards the back, and the ribs are not quite right either. The torso appears to be longer than it should be if it were a human but it still manages to maintain a human-like appearance. So what is it?

Ymir Fritz, the first titan, we are made aware that she was not originally a titan, she was originally a human. 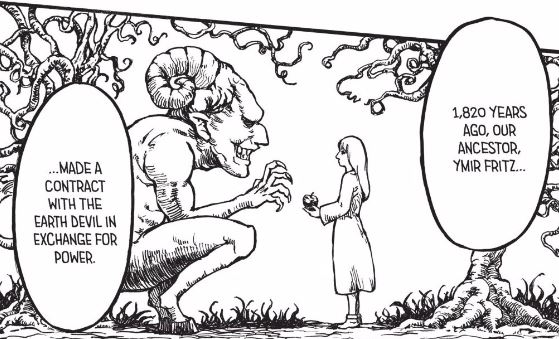 And when she is displayed in her

titan form, she looks shockingly human as you can see on the same page. 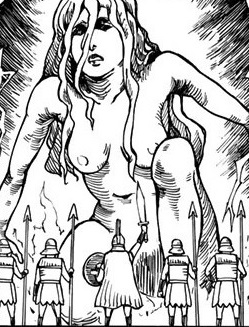 Which would then make her a

So if we consider that

the original titan was actually half-human, then we can then open up this possibility that if she were half-human, she would likely be able to have children with a human, thus establishing the Eldian lineage through procreation with humans.

And, in this scene, although it is not definitive proof

we notice that everyone is sad, and while the father and children are present in this scene, the mother is not. Again, opening the possibility to this idea that the children are actually eating their mother, whom based on the skeleton structure is not exactly human and is likely Ymir Fritz.

And the number of people in the foreground is

Making the total number of people, outside of the center focal point,

It would not be a stretch to say that

the children of Ymir Fritz ate their mother, and those of noble lineage (perhaps relatives) also ate Ymir Fritz. And this could be where our 9 titan powers were inherited upon the death of Ymir Fritz.

In the very least, we should consider that

the children in the ending credits scene are likely the faces we see on the crests of each wall, and could possibly be Ymir Fritz' children.

As we know, the Walls are filled with Titans, the ending credits of the Female Titan arc confirm this. We also know that the coordinate ability, which has been passed down through generations of the Riess family, gives the possessor the ability to control both Humans and Titans to various degrees. Given theses facts, I surmise that the three goddesses were in fact three human women, who, in deference to the interests of the kingdom (we also know from the same ending credits that the coordinate is the subject of a war between two opposing kingdoms), used the coordinate to force vast numbers of their subjects to become colossal class Titans, stand in formation, and then simultaneously invoke their hardening ability to both form, and trap themselves within the walls. The resultant walls were then named according to the person who orchestrated each specific iteration, and through the passage of time, short memory of the human race, and obvious manipulations of collective memory through the coordinate ability, the Goddesses are born

That's what I think anyway, I'm looking forward to finding out what the writers came up with

As stated in the first chapter, they (humanity) built those walls over a century and have lived in them during that time. At this point in the series, there hasn't been any declaration about the wall's symbols (to my knowledge). We can only speculate, but keep in mind the fact that the walls are old and the people depicted in their emblems quite possibly have the same antiquity.

3
What is the origin of the names of the walls?

25
How did humans learn how to kill Titans?
4
How are things purchased in AoT?
18
Are Walls Maria/Rose/Sina the only Wall community in the world?
6
What lays beyond the walls?
10
Why are there outlying towns/cities on the walls in Shingeki no Kyoujin?
0
Are the districts inside the walls 'Elodia'?
0
Were the lure towns in Wall Maria evacuated?
2
Why are Eren and Mikasa shown not to be in the Walls in some flashbacks?
3
Who are the wall cultists?
5
Is there hard proof for the Curse of Ymir?