At the end of the Aincrad arc, Kirito faced Skull Reaper (boss of the floor) and found out that the Guild Master of the Knights of the Blood was the GM himself. After beating him, Aincrad was destroyed and floors 76-100 were still untouched.

At the end of the Fairy Dance arc, Kirito restores Aincrad so the people can explore it again. 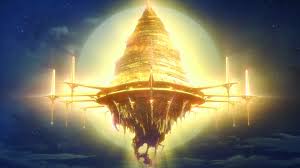 I waiting for the story about floors 76-100, as well as the Ruby Palace (100th floor), but there has been nothing so far. Now that Kirito has begun exploring GGO (Gun Gale Online), are floors 76-100 still untouched?

Still untouched in canon. In the non-canon games Infinity Moment/Hollow Fragment, Kirito and the others had to continue through the upper floors and the Ruby Palace.

It was established within canon that the floors of New Aincrad are being released 10 floors at a time. The Mother's Rosario story arc begins with the update that opened floors 21-30 to begin clearing, notable because Kirito and Asuna wanted to reclaim their cabin on floor 22. Since nothing has been said beyond Mother's Rosario, it is safe to say the upper floors still have not been released.

There is no formal reference to this in manga/anime as far as I'm aware of, but chances are that it probably got cleared or in process of. Aincrad was revived and others are playing in it including Kirito (he commented how he would like to restart from level 1 and beat it properly this time). Unless he got bored, I'm sure he would only move on from the game after someone beats it properly.

The other probability is SAO II happens while he's still in pursuit of that goal.

I was only implied in the light novel and anime, that Kirito would like to clear Aincrad. It was not told in detail about it as after ALO (Alfheim Online), the story moved to GGO (Gun Gale Online). Too bad the online reference in Baka-Tsuki is no longer available.