Has Naruto ever killed anyone?

Just a curious thought I had recently. Naruto has been in an awful lot of fights but I can't recall if he ever actually killed another person.

Technically speaking, Naruto never landed the killing blow on anyone.

You could say that Naruto was a major cause in all of these people's death, but he did not directly kill any of them.

There is someone I know. Yūra was defeated and killed by Naruto's Big Ball Rasengan. His corpse was later devoured by Zetsu.

I know that this thread is old, but I just want to point out that Naruto did kill Aoi Rokusho with the Rasengan. Aoi Rokusho is a rogue ninja who ran away from the Leaf Village with the sacred Thunder Sword that belonged to the 2nd Hokage. Naruto attacked the Thunder Sword that Aoi sensei was using and that sent Aoi sensei plummeting down the cliff, which according to Aoi himself, is a fatal fall. This was during their mission to the Land of Tea (*ep 106 in Naruto). I think that's the closest thing Naruto has to killing somebody on his own without any variables.

Naruto killed white zetsus, you can see it here,

While if you consider them "persons" or not, it's debatable. This wikia describes them as race: humans

This another wikia entry describe white zetsu as "mutated human",

And this other wikia entry,

describes the white zetsu army as "originally humans who fell victim to Kaguya's Infinite Tsukuyomi and were bound by the roots of the God Tree." , later as "No longer humans" and finally as "Because of their modifications, their DNA is very similar to Hashirama"(who was human) 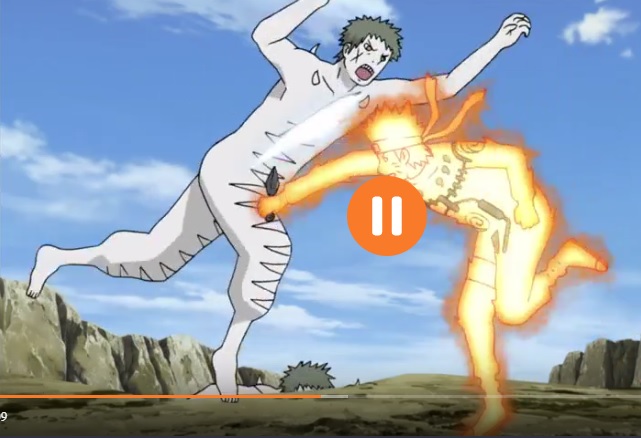 Hiruko from will of fire was fatally wounded by Naruto's rasenshiruken

Naruto then fought Aoi, and eventually defeated him with the Rasengan; by aiming at the crack on the sword, Naruto was able to break it. Once the Rasengan hit Aoi, it sent him flying off the cliff where he fell headfirst into the water.[4] Seeing as he said that a fall from that height was fatal, Aoi died from the fall.

Ultimately, Yūra was defeated and killed by Naruto's Big Ball Rasengan. His corpse was later devoured by Zetsu.

As they battled, Naruto noticed that Fūka was constantly switching bodies to perform different elemental techniques, and that her hair was of more importance to her than her body. In turn, he continuously attacked her hair (which destroyed her bodies) and left her in her purest state — a soul. As the battle came to a close, Naruto charged at her with a Rasengan in hand, and she at him with her hair. The former managed to land his attack first, resulting in her quick demise from a blow to the head

I have also read that Naruto killed many other white zetsu. However, I haven't watched that part.

So yea, the 2 guys and white Zetsu.

Naruto himself has never shown compunction on killing at all. Like all Ninja, he fights to kill.

Well, there is one more guy that is killed by Naruto - "Shura":

Shura kidnaps Akio. Naruto and the others go to Shinobazu's base to free him. Shura beats Akio demanding to know where Gantetsu hid the stolen treasure. Todoroki charges in and Gantetsu gets captured. The building burns and Todoroki panics, but overcomes his fears to help Gantetsu and his brother escape. Naruto fights Shura and defeats him with Rasengan sending him plummeting to his death in the forests below.

I remember he killed Fuuka in one of the filler episodes by cutting her hair.

1
Do zetsu clones die when they converts into trees?

13
Do I have to watch Naruto before Naruto Shippuden?
2
How did Naruto learn the Teleportation Jutsu?
1
What's up with glowing Naruto?
2
How could Obito transport his body parts in another dimension without bleeding?
7
Has Sakura expressed signs of love towards Naruto?
1
What happened to the power of the tailed beast that was inside Naruto?
3
Where did the God Tree come from?
8
Is Gaara able to control sand because of his mother or shukaku (the 1 tails)
3
Why doesn't Pain use other paths when his bodies are killed?
0
Why does the Naruto wikia state there are 18 wielders of the Mangekyo Sharingan, if Itachi told Sasuke he could be the third?