In the Pokémon games, when Payday is used, you can gain a small amount of money. The amount is however pitiful, so it's never used as an infinite money trick or effective money grinding strategy.

In the anime however, during the Johto League Arc, in one episode Jessie, James, and Meowth are copycatting a famous burglar who had a Meowth as a partner. In his escapes the burglar's Meowth used Payday like a smoke screen. When Jessie and James copycat, they do the same thing, however because Meowth can't use Payday, Meowth throws bottle caps belonging to James' collection. (When Ash, Brock, and Misty examine the "coins" they comment they are just bottle caps, after which you hear James in the background saying they aren't "just bottle caps".)

I am wondering however, is the money that's thrown out when Payday is used the same kind of money used in society in Pokemon? If so, then how is it people don't abuse the move to get rich? (For example, Team Rocket stealing Pokémon with Payday and using them to fund their criminal operations.)

In chapter 56 of the Pokemon Adventures manga, you can see how Kanto's Pokemon Fan Club Chairman had perfected the pay day move on both its Rapidash and Fearow. He used the coins to pay his ticket to ride the S.S. Anne, so they must be real coins. As to why Team Rocket does not use this method to gain loads of coints, it probably costs too much time and effort to be worth it. Imagine your cat could spawn a couple of cents a day and with some effort it might be able to spawn lets say a dollar a day. You might retain only a little after paying for the training and food to keep your cat healthy to spawn lots of coins. I doubt it would make someone rich quickly. I think Team Rocket would be much better off just robbing a bank or something or stealing from some rich dude instead of stealing or breeding a bunch of Meowth. 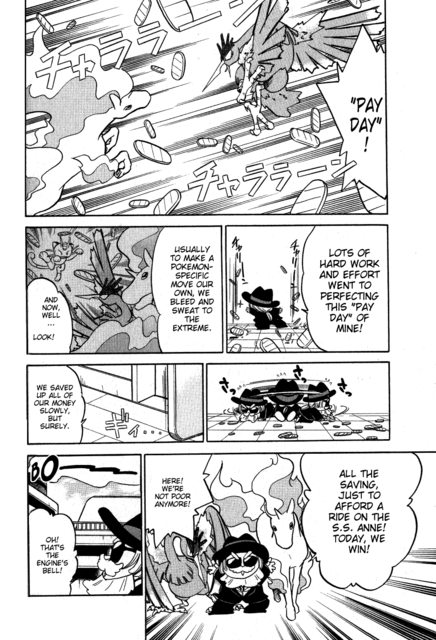 It's possible that Payday as a move that is only successful if the opponent has money on them. In this case the Pokemon would need to have some kind of money and so the move would not always be successful in the anime if they don't have access to what they consider money.

While I have no canonical answer, I do have a few ideas.

One potential reason the crowd might have swarmed for Payday coins would be that it looks like real money. In a crowd, they might not know it was a Payday move and mistake fake coins for real ones. It could also be that Payday is not a well known move to the general population.

0
Are these constellations real?