I am quite sure I read the localized version of the manga about 10 years ago, so the manga must have started serialization in Japan many years before that.

The manga started with the president being injected something into his hand, and fell into coma. All the doctors tried many types of drugs to no avail. The protagonist, who was a great doctor and surgeon, somehow came to operate on the president. It wa revealed that the president's pericardial cavity (the space between the double-walled sac containing the hear) was inhibited by a bunch of worm-like parasites, and he would die if the parasites were left to multiply, since it would obstruct the heart's beating. In the surgery, the protagonist had to stop the heart of the president and skillfully used a small clip to pick all the parasites, then restarted his heart. He also ordered to filter president's blood to remove all traces of the parasite in the blood stream.

Can anyone help me identify this manga?

After googling to no avail, I tried searching for "surgeon" on mangaupdates and go through the list of result. Among the results, K2 has a similar art style, but the synopsis is a bit different from what I remembered, so I check out the prequels Super Doctor K and Doctor K via Google and found the manga I was looking for in Vietnamese.

The image below is from volume 1 chapter 4 showing parasites on the heart: 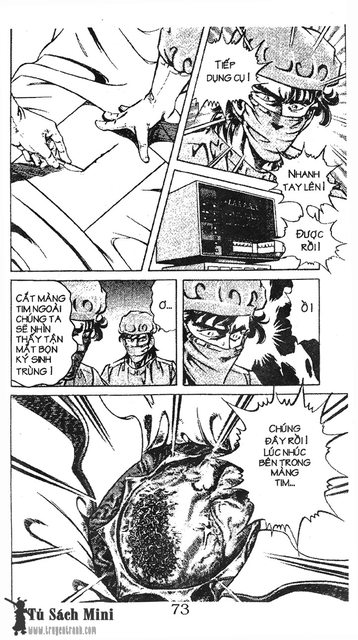 Since I still don't know the exact title of the manga, I check the Wikipedia article of Super Doctor K. The manga was serialized from 1988 to 1998. While the series' name stayed unchanged in the magazine, it was changed to Doctor K for tankoubon released after 1996. The synopsis of Doctor K on Wikipedia matches the description in the question:

Jim Hamilton, the President of the United States, is suspended between life and death after receiving a serious injury from unknown person. The suspect is Doctor K. What is the motive behind the crime? And what is Kazuaki's plan? Starts the final arc of KAZUYA's story.

Not the answer you're looking for? Browse other questions tagged super-doctor-k or ask your own question.