Young boy protagonist with a sword containing a red stone on its hilt? [closed]

Ask Question
Asked 8 years, 2 months ago
Modified 5 years, 4 months ago
Viewed 6k times
13
votes
This question was closed because it is a type of identification request that is disallowed by the community. It is not currently accepting answers.

It was in a modern day world with guns and wars, there was some kind of armed conflict going on.

The story was about seven powerful crystals or gems or rounded stones, each carried by a different person wielding it in a way that suits his fighting:

In one of the scenes the boy was shown to have been born with the stone in his hand.

By the end of the series they were trying to unite the power of the stones to defeat some kind of enemy.

The year is 2588 in the system of Godworld and its eight satellites. Humanity came here in the distant past, after a long journey across the stars from Earth. Now the system is ruled by a loose coalition of powerful families: House Owari, House Meed, and House Iigy. The story begins when Kai, the heir to House Owari, attacks an icy planet. Living in a humble village on the surface is Kou, a young boy who is perpetually arguing with his father. When Kai's navy arrives, Kou takes his father's mighty Murasame sword to fight back, and his adventures begin. A sci-fi remake of Hakkenden. (Plot from Animevice).

This is a picture of the main character Kou who has a red gem in his sword (You can also see a dog with an eyepatch: it hide a yellow gem in one of his teeth). 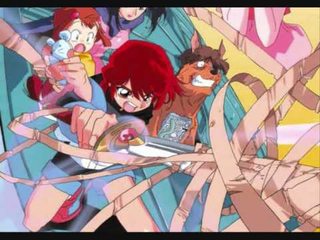 This is Jinrai who has a green gem in his shield.

This is Tomoka who has a blue gem in a dice: he is a gambler and use cards also for fighting. 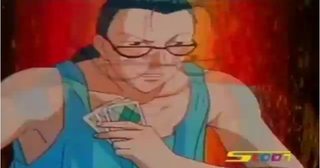 The anime you are looking for might be Deltora Quest 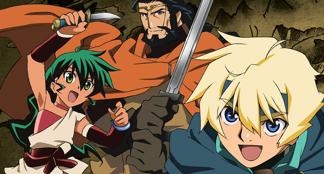 The Seven Gems of Deltora are taken from The Belt of Deltora and scattered over the most feared places in Deltora and The Shadow Lord takes over Deltora. King Endon who was supposed to be the protector of the Belt which protected the land, somehow vanished from the land to leave his people in the mercy of the tyrant for 16 years. On Lief's sixteenth birthday after narrowly escaping the Grey Guards, he is presented with the Belt of Deltora, given a task to gather the 7 gems and to find the heir to the throne in order to rid Deltora of the evil Shadow Lord once and for all. He is also given a sword, an invisibility cloak, a rough map of where the gems were to be and a travelling companion named Barda who was long known as a beggar before revealing himself as one of the palace guards. He and Barda leave city of Del and enter the Forests of Silence where they are attacked by the Wenn and paralyzed. They are woken up by a mysterious girl named Jasmine, who at first believed them as Grey Guards and only intended to rob them and leave them to be eaten by the Wennbar. However, after being persuaded by an old tree that told her that they were not Grey Guards, she comes and saves them with an antidote that freed them from the paralysis.

The main protagonist is a young boy set out on a quest by his father to find the gems and put them together to defeat the evil tyrant.

He runs into different people and places that have the gems.

I found the information from the Deltora Quest wikia.