Are there any official anime-themed LEGO sets?

I've always liked Lego, and I don't think I have the patience or painting skill for Gunpla, so I've been looking around for anime-themed lego.

The only lego sets I can find are unofficial ones that people have made themselves. 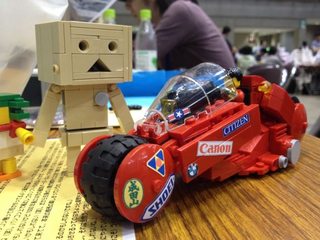 Are there any anime-themed lego sets that I can buy to make myself?

While not exactly LEGO, Nanoblocks (ナノブロック{nanoburokku}) are very popular in Japan, and they do have some of anime-related items. You could consider this answer a supplement to @bgrif's answer.

First, have a look at a comparison of LEGO (the big ones, of course) to Nanoblocks:

They're obviously a lot smaller, but the construction is still pretty solid, and given that they're more common than Mega Bloks ever were, I'd say there's some merit to their abilities.

Now, if you're still interested, there is a list of Nanoblocks available from Plamoya Japan, including a Pikachu (and the related Pokemon sets), though that's mostly it in terms of anime from them. However, there's lots of designer sets, such as those on this blog (Japanese), including Evangelion, Madoka Magicka, Doraemon, and others.

So, while you may not be able to find what you're looking for in LEGO, there's definitely other options out there.

Lego have made anime-themed sets that can be purchased off different sites like Amazon and Ebay. They are not available on the main website.

The anime-themed ones Lego has officially done are Exo-force and Avatar. There has been talk about them doing more on the Lego forums but nothing is official as of now.

The anime-themed Lego sets that you can buy that are not officially from Lego, can be used with Lego products.

Not the answer you're looking for? Browse other questions tagged merchandise or ask your own question.