Why did Macao ask Fairy Tail not to touch Twilight Ogre when they came to take the money?

In episode 123 of Fairy Tail, the Twilight Ogre guild came to take their money from Fairy Tail. After one of their guys sent Macao flying, he asked Fairy Tail not to touch them.

I found that pretty ridiculous. I mean, for what reason would they prevent them from fighting.

Why did he prevent it? Doesn't this make their guild look even more pathetic?

For the past seven years, they tried to keep their guild alive as much as possible. They could have picked a fight and might have won this round, but if they had, the guild would have been completely destroyed shortly after by Twilight Ogre.

Master Macao, The Fourth, did not want to risk this as they didn't have much job opportunities as it is, let alone if they had to pay for hospital expenses and repair expenses additionally.

Also, Fairy Tail was indebted to Twilight Ogre and it is not really in the guild's policy to steal money and to repay your debts. That's why the Fourth accepted their faith and punishment, and by doing so, he kept their losses at a minimum while keeping the guild alive as long as possible. 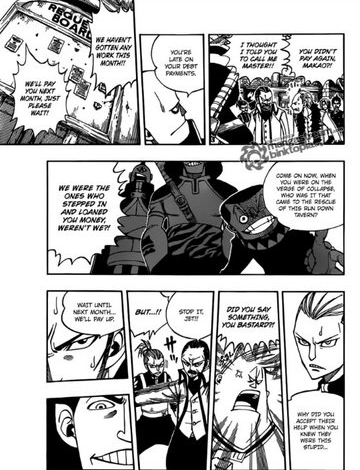