Where in the timeline of SAO did the battle vs. Laughing Coffin occur?

In episode of 6 of Sword Art Online (season 2), Kirito reveals that during the events of SAO, he and the front-liners confronted the Laughing Coffin guild at their headquarters.

The result was that 20+ members of Laughing Coffin were killed along with 10+ of their own. We also learned that Kirito killed a total of 3 people during the events of SAO. (2 during this battle) 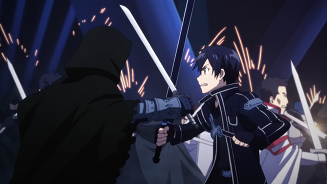 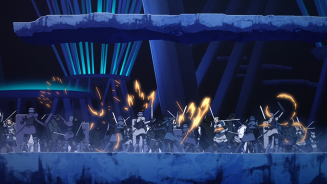 Chronologically, between what episodes from season 1 did this battle happen?

According to the Sword Art Online Wiki, the battle (called the "Crusade") happened in August of 2024:

By August 2024, they had already killed hundreds of players, thus they were now the number one threat against the Clearers. The Clearers tried to negotiate with them via messengers, but the guild killed every one that they sent. After realizing that they would never stop killing and finding out the location of the guild's headquarters from a member of the guild, the clearers formed a high-level crusade party to wipe the guild out. Fifty high-leveled players (including Kirito and Asuna) went to attack them, however, just before they reached the designated location, the Laughing Coffin members were warned about the incoming party, so they decided to ambush the crusaders instead. Although some of the crusaders were unable to kill the red players, as the guild would not yield, some of the crusaders finally took the initiative of finishing off the Laughing Coffin members. At the end of the battle, twenty-one Laughing Coffin members and eleven crusaders had died, with most of the remaining Laughing Coffin members, including XaXa and Johnny Black, being arrested by the clearers and sent to the Black Iron Palace prison. Somehow, PoH was not found in the list of deceased or captured members, making him the only one to escape the crusade.

This was 1 month before Kuradeel was invited into the Laughing Coffin guild:

Although the guild was vanquished during the crusade, PoH, who avoided the crusade, watched Kirito and Kuradeel's duel on the 74th Floor. After hearing that Kuradeel wished to kill Kirito, after the duel and before Kirito went to a mandatory training session with Kuradeel and Godfree, PoH approached Kuradeel. PoH then invited Kuradeel to his guild and taught him how to make paralysis poison.

Here's a full Timeline. It says the battle happened after the "Warmth of the Heart" light novel volume and that by August, they were on the 70th floor. So I think that would put the battle somewhere between episodes 7 and 8?

As you've mentioned: this scene is NOWHERE in season 1. I just checked (out of curiosity), and skimmed through episodes 6-15 (Kirito defeats the head master in episode 14) and there was no mission involving any guild going after Laughing Coffin in those episodes.

During the episode where there was a 'death' in a safe zone (can't remember the name) I believe Kuradeel was the 'point' or leader of the three people who where hired to kill the group... with Red-Eyes being there too. At least that's what it looked like

The safe zone killing episode Laughing Coffin players were PoH, Red-Eyed Xaxa, and Johnny Black, three of the top members. Kuradeel is recruited shortly before he kills Godfree and tries to kill Kirito, well after the crusade, sometime after Kirito beats him in the duel. He's just a grunt really.

This event happened in the manga but was never put into the actual season for anime, but after that was made they created season 2 which heavily focused on the laughing coffin and the survivors of that battle and him having to recall that fight scene so they had to place it in and they didn't go back and change up the previous SO A to make it fit

BRockBRock
1
1
Add a comment  |
Highly active question. Earn 10 reputation (not counting the association bonus) in order to answer this question. The reputation requirement helps protect this question from spam and non-answer activity.

3
Did Kendo practicing helped Kirito in SAO?
37
What does Kirito say at the end of SAO?
3
Where can I legally download SAO light novel in English?
1
In SAO 2 did Asuna break up with Kirito?
5
When did Kuradeel join Laughing Coffin?
10
What is causing Kirito's eyes to change colour?
9
Where is Yui stored in SAO II?