Can the Titans swim?

I have only seen the anime and haven't read the manga, but a question came to me:

Can the titans swim?

We know that they are abnormally light and strong for their size. However, the fact that they evaporate after dying kind of suggests that they are formed of some sort of compact water vapor, so should we expect them to melt when they come into contact with water? It's not like they disappear when it rains... Or maybe they can't swim because they're too stupid

Because, if they can't, this place in Paris could've been a possibility for humanity. 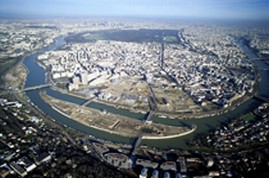 If you take a look at the official closing theme of Season 2 of Attack on Titan you see the following:

Titan emerging from the water.

But the way that they emerge it suggests

that they actually don't swim but cross bodies of water by walking along the bottom.

Also from the scene we can derive that

if titans can walk along the bottom of bodies of water this implies that they either have no lungs or do not require oxygen for survival which is something that was actually discussed on Anime Stack before.

And finally we can see that

water does not harm them in any way whatsoever.

Well, we know that all of humanity has been wiped out, except for the people living inside the walls.

Seeing as much of mankind lives on islands (such as the Japanese), it's safe to assume that Titans are able to cross water somehow. Presumably, they're able to float due to the previously mentioned attribute of their abnormally light weight.

There's also a river going through Shiganshina District that appears to be used for transporting cargo, so mankind is not oblivious to manmade bodies of water.

The answer is we don't know. We have not seen (I think) a titan crossing a body of water.

Some titans can climb. So it is a possibility that they can swim like this guy: 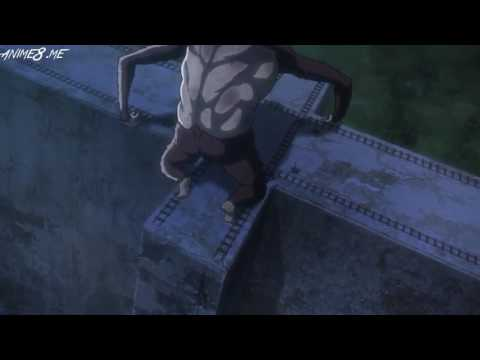 i know he's a shifter but in season 2 when they try to trap the female titan a titan tries to climb and then falls. so some titans may be able to swim.

7
Why can't Titans attack using the canals passing through the walls?
5
In Attack on Titan, how did the river barge escape Shiganshina in episode 2?

23
Why does the ground shake when titans walk?
11
Why didn't the Titans wipe out humanity yet?
2
How humans became titans?
2
Why do the humans that can turn into titans kill other humans?
5
Could titans suffocate?
2
Where were the scouts when the titans attacked in the beginning?
2
Can normal titans dig the ground?
5
How can a Pure Titans recover the full body after extended period?
3
Can humans be cut out of all Titans?