Why Black Zetsu is attached to Kaguya Ootsutsuki?

I am wondering why Black Zetsu is attached to Kaguya Ootsutsuki. If he is a part of her body then why he is taking and hiding himself inside of her arm. Who know if he is controlling her.
It seems like more than one questions so make it clear and answer the following one.

Why Black Zetsu is attached to Kaguya Ootsutsuki 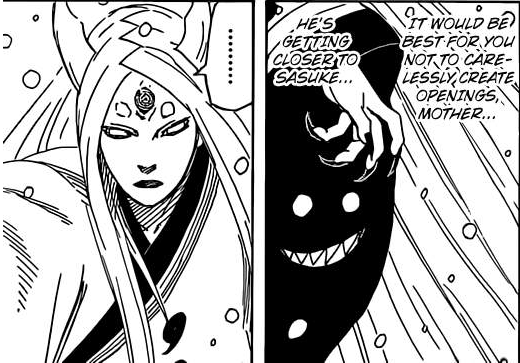 Black Zetsu by himself is not powerful enough to take on either Sasuke or Naruto by himself. So, instead of being in the battle field, he's taking cover in Kaguya Ootsutsuki's arm (His mother).

(As we have seen black Zetsu also has a physical body of his own, so taking that as a premise we can deduct that he is not powerful enough to take on the duo)

I believe it's pretty clear that Kaguya is not being controlled. It's just that the will of black Zetsu matches with that of Kaguya unlike her other sons.

Black Zetsu also said (to Uchiha Madara) that he's not the will of Madara's but Kaguya's.

6
What did Uchiha Madara do to Obito with the Black Zetsu?
7
Why wasn't Naruto able to sense Black Zetsu?
2
Who was Black Zetsu created by? (Manga Spoilers)
6
Why did Madara suddenly turn into Kaguya?
8
How did so many people get away with cheating during the written portion of the Chunin Exam?
4
Why didn't Madara use Izanagi to counter Kaguya?
3
Why didn't Sasuke use Amaterasu on Kaguya?
5
Are there other ways of reading the Uchiha Tablet?
0
Why wasn't Kaguya able to tell the difference between Naruto's clone and the original? Ep: 472 Naruto Shippuden