After having watched Shinsekai Yori, something is still bugging me.

From what I understood, the council received Maria and Mamoru's bones from Squealer/Yakomaru after they had gone alone in the wilds, behind the Holy Barrier. To me, that would mean that the bones were received only a short time after they escaped.

If they were really dead at that time (the Council says that the bones were DNA checked), then when did they have their child? Did I miss/misunderstand something?

After Maria and Mamoru escapes from Kamisu 66th district, the story undergoes a time skip 12 years ahead, where Saki and Satoru are 26 years old1.

As we all know, in episode 18, Asahina Tomiko, the head of Ethics Committee, reaffirmed the death of Maria and Mamoru. After they received the bones from Yakomaru/Squealer, they have checked that the bones are from human and there are no inconsistencies in age and gender. They even further confirmed by doing DNA tests and matching the dental record from Harmony School. Therefore, at the point when Saki and Satoru are 26 years old, both Maria and Mamoru have deceased.

However, it was not mentioned when they received the bones in the anime (or maybe I have missed it).

I only found reference in the manga2 (volume 4 chapter 13), where it was mentioned that the bones are recovered 2-3 year after their disappearance. 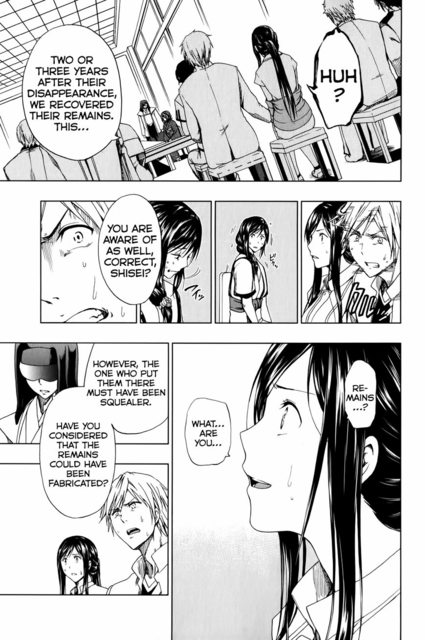 Therefore, it is safe to conclude that during the period of 2-3 years, Maria and Mamoru had a child together, then Maria and Mamoru were killed by the queerats and had their bones sent back to the district. Their child was raised by the queerats, which made the child recognize the queerats as his/her3 own species and enable him/her to freely massacre other humans. In the anime, the child is shown to be around 10 years old, which matches the timeline of the story.

1 This is confirmed by Wikipedia, both English and Japanese version. In the summary of the chapter 5 of Japanese version: 12 years passed, Saki and Satoru are now 26 years old. (12年が過ぎ、早季と覚は26歳になっていた。)

2 There are many differences between the manga and anime. However, the key part of the story remains: Maria and Mamoru leaves the district, their child raised by the queerats later helps the queerats attacking the village.

3 The child is male in the novel and female in the anime. According to cite note on Wikipedia.

At least they were alive for 2 years. This is enough time to create a child.

I mean the top answer's obviously what the writer was going for, but it has a plot hole in it, or at least it's not really believable.. The kids said they'd report Maria and T-whatever his name is as dead, Squealer suggested that they should say an avalanche killed them... Really? An avalanche killing 2 kids with superpowers? And on top of that, they'd have to see it actually happen, so, in order for this story to work, they'd have to have found them first, then either they agree to come back (unlikely, but hey, could be made believable), or, they run away again (the scenario that would've happened IF they found them). In the first scenario, the avalanche happening wouldn't have a time restriction, so sure, an avalanche randomly going off would be believable i guess. But it would have to kill ONLY those 2, again, nevermind their powers and all, BUT ALSO while the other 2 kids, WHO ALSO HAVE SUPERPOWERS, watch it all happen? Nope, nobody would buy that, the board would know somethings off. In the second scenario tho, the avalanche would have to happen the exact same moment they decide to run away, which is really convenient isn't it? And again, 2 kids with superpowers doing nothing, the other 2 kids with superpowers just watching it happen. Nope.

Let's say that the board does buy their story though, searching for those bones would be the highest priority, the kids would probably be forced to show them where it all happened, which would narrow the area greatly obviously. Now they start the search from that area, and keep widening it. If they don't find it in like a month with their psychic-powers, the kids obviously lied, somethings off, they investigate, consequences. But let's imagine that in this world where grownups are paranoid as fuck, paranoid enough to kill innocent children, even their own at times, let's just imagine that they keep on searching forever without questioning it, and then dig the bones up in 2 years. Where would Squealer put them? A Queerat couldn't hide them deeper then the superpowered humans didn't already dig. So if they found the bones in layers above what they've searched, it would be obvious that they were put there recently. Again, let's imagine that the paranoid humans wouldn't notice this, and that the depth of it doesn't matter. Squealer could either put them where the kids said they saw the avalanche, or, somewhere random in that entire snowy biom. First case, it becomes obvious that the bones weren't there 2 years ago since it's been thoroughly investigated already. Second case, the kids lied and the bones were nowhere near, they get to the bottom of it (hypnosis etc.), smell something fishy's going on with Squealer, consequences.

So there's not a single way that this lie could be hidden from the board, and in turn saddens me cause it makes the story unrealistic :(.

Also, if anyone were to die in an avalanche, their body wouldn't rot since it would be kept frozen until the snow started melting, so they wouldn't find bones, they'd find the entire body intact. Well, mostly. There have been cases of humans finding frozen bodies that were 500 years old. Would an educated society with access to all the previous civilizations knowledge miss that fact :) ? Doubt it, since anyone could deduct that using simple logic. Keep in mind that freezing to death probably happened in their civilization often, so they'd be even more aware of this fact then we are.

Edit: - Just rewatched episode 18, apparently Squealer was the one who brought them the bones? So i guess I didn't even have to try and develop those other theories that had more potential of working out, the anime just decided to go with the one that's not possible at the slightest. A Queerat finding bones deep in the snow when superpowered humans couldn't, alright.