Apart from Momotaro's Sea Eagles, did any other animated propaganda survive WWII?

The question is mostly in the title; When discussing propaganda through anime, most articles refer to Momotaro's Divine Sea Eagles. 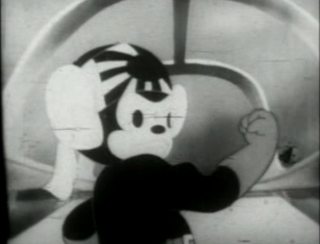 There was definitely other anime which were produced during wartime to promote the army's cause - but a lot of it was destroyed by the Americans after Japan's defeat.

Is there any other surviving animated Japanese propaganda from WWII?

"Toy Box Series Episode 3: Picture Book 1936" (オモチャ箱シリーズ第3話 絵本一九三六年) could count, depending on when you regard WWII and the second Sino-Japanese war as starting. (1934 in Anime English Wikipedia page listing it)

Mickey Mouse flies in with a squadron of mouse-headed pterodactyls to attack an island populated with cute Japanese animals, including a surreal Felix the Cat with sausage-link arms. Link (Via Pink Tentacle)

[I]n the aftermath of the Mukden (Manchurian) Incident and Japan’s announced withdrawal from the League of Nations after the League concluded they were the aggressor, right wing elements in the country started an opinion campaign that once the Five Power naval limitation treaty ran out in 1936, America was planning to attack Japanese possessions, so Japan needed to expand its military… just in case.. Apparently, this cartoon was an attempt to stir the pot."'

Browsing Wikipedia's XXXX in anime list, I came across Sankichi the Monkey: The Air Combat in the 1942 year. Here's a YouTube link featuring English subtitles.

Not the answer you're looking for? Browse other questions tagged anime-history momotaro or ask your own question.

19
Where did the mecha genre originate from in Japan?
8
Where did the term fan service came from?
11
Where did Yaoi Paddles come from?
9
When did the transition from standard definition (4:3) to widescreen (16:9) for television anime happen?
9
Are there any other Guinness world record holders?
3
How did “other world” or “isekai” stories gain so much popularity and where do they have their roots?