It's an anime film around half an hour long, and I think it was part of some kind of anime film festival or contest (?). I'm not sure.

This is what I can remember about it, though I'm not sure if it's 100% accurate. It's not necessarily in order:

The MC is a boy who has two friends and I think they talk about an anime or a manga a lot. Anyway, there are three girls the MC takes notice of. They're talking when the phone of one of the girls rings. Her friends comment about her ringtone being dull. Later, the girl leaves for a bit and her friends change her ringtone as a prank.

During class, the girl's phone rings again and she is surprised at the ringtone, which is a piano song.

The MC hears it and he keeps note of the song.

After class, the girl gets mad at her two friends, but she forgives them later on.

The next scene I remember is where the MC and his friends are talking, and his friends go home ahead of him. He stays behind at school and starts playing the song in the girl's phone on an app in his phone. The girl hears it and gets surprised, then she asks him not to play that song. The MC then asks her for the song title and the girl says she made it herself. The MC praises the girl but stops since she clearly doesn't want to do anything with the song.

The MC then goes home and goes to sleep.

That night, he has a dream. The dream is about a female doll or something, a tower and there are three multi-coloured glasses.

I also remember a scene where the girl has drawings about this exact same dream, but I don't remember how the MC got those drawings u_u

There's also this scene where the MC and girl are talking, and then the boy mentions the colours of the three glasses. The girl asks him how he knew the colours, and he says he saw it in her drawing. The girl pulls the drawing out and apparently, the drawing isn't coloured. The MC realizes that it was from the dream and the girl is shocked that they had the same dream.

The girl then lets the boy listen to some recordings in her phone. It turns out that the song from earlier wasn't made by her but it was from her dream. Her mother thought she was going crazy because of the dream and had her gone through therapy.

There's another scene where a boy who is in love with the main girl fights the MC for "stealing his girlfriend" or something.

There's another scene where the MC accidentally rips the drawing of the girl and he draws another one as a replacement. The MC apologizes and gives the girl the substitute he made, and the girl says something along the lines of "We're the same" or something.

Anyway, sorry about how long and messy this is >_<" I just really want to know what the title is. Any help is appreciated!

Harmonie is the anime you're looking for. 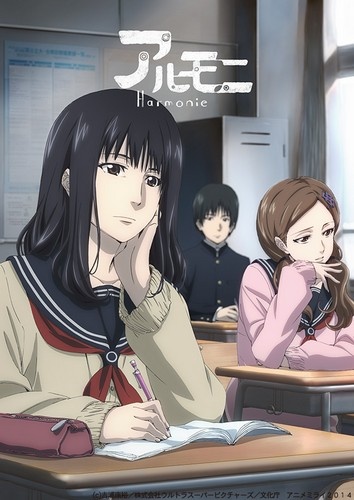 Every person has his or her own little world. Among the 34 bustling students of classroom 2-1, there are many such worlds.

Honjou Akio's world—my world—is filled with passionate talk about last night's anime with Yoshida, Watanabe, and other friends. It's an fun, comfortable place... But, I always wonder. Wonder about the world of Makina Juri, smiling and surrounded by gorgeous friends on the other side of the classroom.

One day, I enter her world. But it's not as simple as it sounds.

A girl's phone rings during a class. A boy tries to reproduce the ringtone and this becomes the spark that makes them meet, dream together and discover each other personal world.

Not the answer you're looking for? Browse other questions tagged harmonie or ask your own question.