In Tsubasa Family and Tsubasa Tiger, it was mentioned in a conversation between the Fire Sisters and Tsubasa that both Karen and Tsukihi have boyfriends[1][2].

What is up with these ridiculous names? Has the author explained the names or expanded the story on who they are?

I tried to find some comments from the author on the Japanese internet, but came up empty-handed due to my lack of knowledge of Japanese. I do have some very tenuous evidence that as of 2013, there was no such explanation even in Japanese, discussed below.

According to the Japanese Wikipedia page on the Monogatari series, very little is known about Mizudori-kun and Rousokuzawa-kun except that Mizudori-kun is shorter than Karen-chan and Rousokuzawa-kun is taller than Tsukihi-chan, suggesting that they look similar to Koyomi and adding evidence for the Fire Sisters' massive brother complex. Tsukihi-chan talks a little about Rousokuzawa-kun in Neko Black, during which she says he wants to fondle breasts in a set-theoretic sense, and also says during Tsukihi Phoenix that her relationship with him is chaste; she also says that Karen-chan and Mizudori-kun haven't been getting along. The Monogatari series wikia also has next to nothing to say about them. Since Koyomi, the viewpoint character, has absolutely refused to meet them, we've so far never seen them, and it seems that they're more a minor plot detail than anything; as far as I can tell, what I listed above is the sum total of our knowledge about them.

As for their names, Nisio Isin, author of the Monogatari series, has a history of making up bizarre names for his characters, usually ones full of pun and subtext, and it seems the more minor they are, the more bizarre the names get. From the Monogatari series itself, I submit "Kaiki Deishuu" and "Kiss-shot Acerola Orion Heart-Under-Blade" and the name "Valhalla Combi" for the combination of Senjougahara and Kanbaru; see http://en.wikipedia.org/wiki/Zaregoto_Series#Characters and http://en.wikipedia.org/wiki/List_of_Medaka_Box_characters for examples from his other work.

The next part is a little tangential since it involves an unofficial doujinshi, but I take it as evidence that Japanese audiences also had no access to an explanation as of April 2013 (the doujinshi's publication date) since they were making up their own theories. I once found a doujinshi (a very, very NSFW doujinshi, which could get you fired if you happen to be at work, so I'm not going to provide a link, but the title is Sukimonogatari - SFW Cover) that offered a theory on the names "Rousokuzawa-kun" and "Mizudori-kun", along with a random sex scene. Here's part of a page (edited to be SFW) that explains some of the theory: 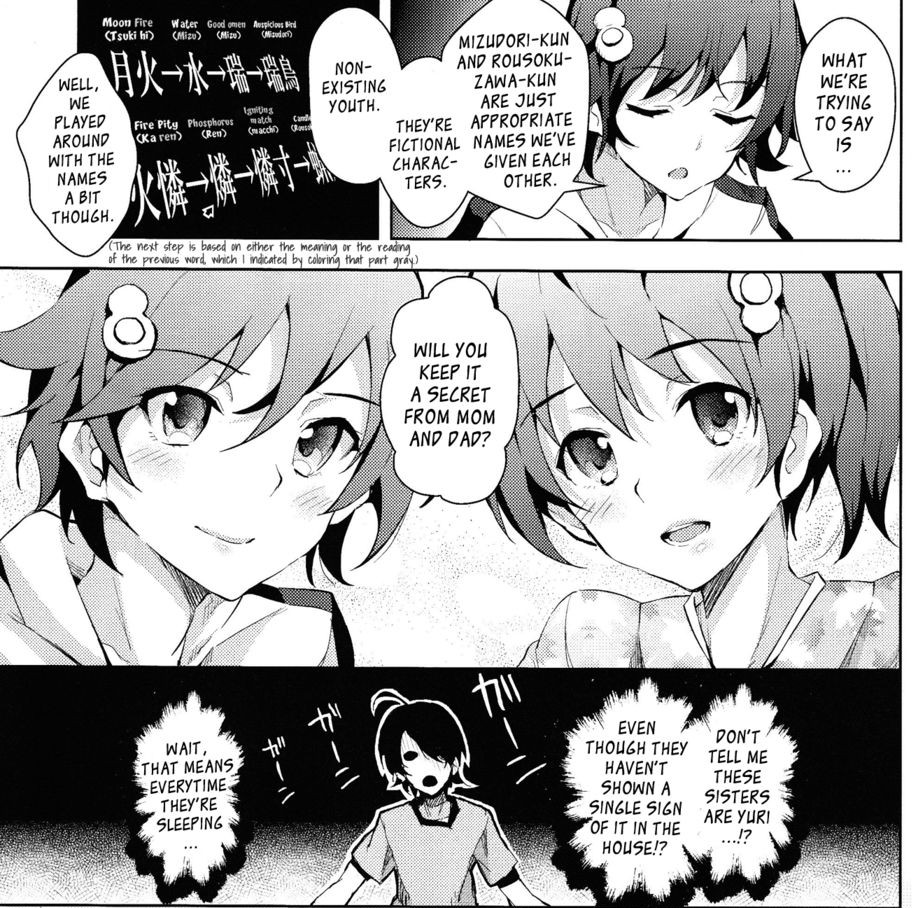 Koyomi takes note of the terrifying coincidence in the names they give each other and the kaii that they are affected. Tsukihi-chan, called "Mizudori", is a bird kaii, and "auspicious bird" can refer to phoenix. Karen-chan, called "Rousokuzawa", was afflicted by a bee kaii, and candles can be made of beeswax. When Koyomi asked why they choose such names, the Fire Sisters explain that they chose those names because migrating birds and candle clocks are both methods of telling time, which aligns with the fact that the entire Araragi family has names with timekeeping and calendar themes1.

In summary, nothing much is said about these two in the novels or anime up through the end of the second season, and no explanation is given for their names up to that point. Although I didn't find anything official, the very scant information on these two, along with the (admittedly weak) evidence of the doujinshi, suggests that they're another example of Nisio Isin's famously bizarre punny names for his characters, and no, he isn't going to explain them (that would ruin the fun).

42
What do the black and red scenes mean?
5
What was the screen that appeared of Senjougahara during her phone conversation with Kaiki?
15
What's up with this Araragi and Nadeko scene in Tsubasa Cat, Part 1 (episode 11)?
26
What is up with the pattern on the fence?
3
Why did Nadeko use different names for Araragi?
13
What's the deal with Shinobu's hat?
5
Why don't Araragi and Senjougahara call each other by their given names?
5
What exactly is the relationship between Araragi and Shinobu?
10
What do Karen and Tsukihi see Ononoki as?