What manga is this magical girl on a plane from? [closed]

I found this image on imgur at one stage and added it in my browser bookmarks. Rediscovering it now, I'd really like to find the source of it so I can read the rest.

Does anyone know what this is from? 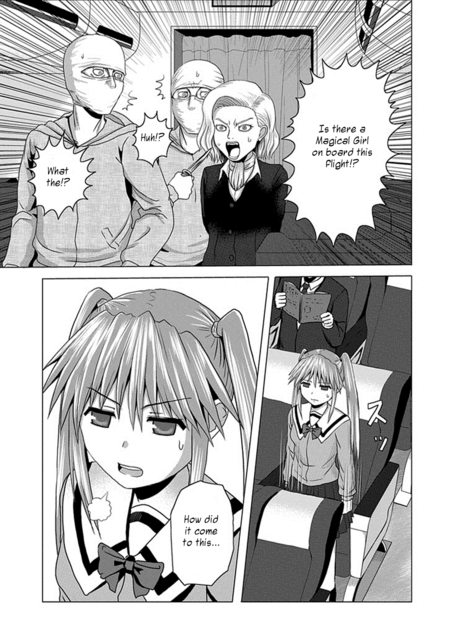 This manga is Zai x 10 （[罪×10]【じゅうざい】） by Yamauchi Yasunobu, the same author as Danshi Koukousei no Nichijou.

The first 2 chapters and the latest chapters can be read here on Gangan Online (in Japanese).

Below is my own summary of the first 11 chapters. It contains heavy spoiler that will destroy your viewing experience, especially the comedy, so read with care:

The story is basically about 10 different girls/ladies either involving in or committing 10 different kinds of crimes, where their special powers are shown. Their special powers originate from their ribbons, which were given to them by a mad scientist. The magical girl, who also gets her power from the mad scientist, decides that the mad scientist is the root of all the evil and beats him up. The mad scientist then reveals that there are other girls whom he had modified before, and their power source is their ribbons. Thence, the magical girl goes on a mission to retrieve all of them.

Not the answer you're looking for? Browse other questions tagged zai-x-10 or ask your own question.