In Tokyo Ghoul, during episode 1, Kaneki turns into a half-ghoul, and he is forced to abandon his old life, sans his good buddy Hide, though they do spend less time together.

However, we barely even get a glimpse of Kaneki's home life. We see him briefly in what appears to be an apartment or small home, but without roommates or family. 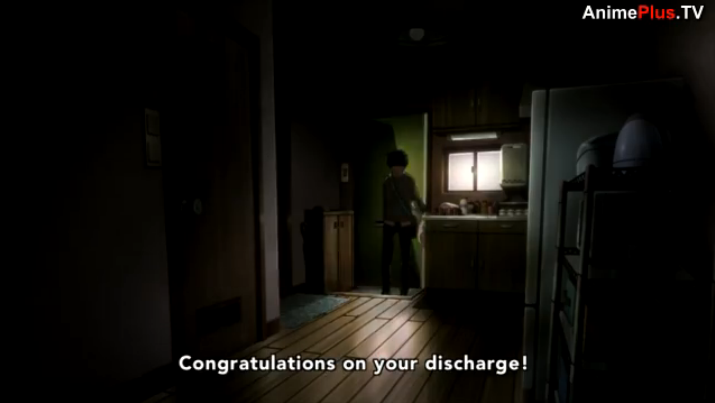 I think Kaneki is around 18, so it's possible he lives alone, but surely someone took care of him long enough to wonder where he is.

Why does no one seem to be looking for him?

In episode 12 of the anime, it is explained in detail.

As far as the anime goes, Kaneki does not have any other family. As a result, anyone that would care for him is dead, so they can't go looking for him, and his aunt doesn't care about him, so she would not look for him.

I can't seem to remember when this is from but, it was revealed that in the later episodes, Kaneki's parents died when he was very young and ever since then he has been living alone. He grew up as a very lonely kid only having Hide as one of his closest and only friend. In his life before the accident of him becoming half-ghoul the only person close enough to care about him is Hide. In the later episodes, Hide makes his appearance multiple times and show some concern for Kaneki.

His aunt's son, Yuuichi, who she always compared with him since Yuuichi did not do well at school. This greatly angered her. When comparing her son with Kaneki, she also compared Kaneki with his late mother, saying how alike they were. Her feelings of inferiority regarding Kaneki's mother were turned on him as spite. As time passed, the family became a place that did not give Kaneki any comfort for long because nobody in the family would look after or care for him

I think Kaneki has now moved to Anteiku. Since no one gives concern in regarding where Kaneki is, he could have moved out of the old house or still be staying there, but that would not make for any good content since, his hungers, desires are all satisfied at Anteiku to the extent that him in his home would just be watching TV or sleeping.

In Tokyo Ghoul A there were missing signs in the college that Kaneki went to, and there were also files on him missing. In an episode his friend always take down the missing flyers, and I guess the government kept this accident confidential since only the doves had access to the information. But he has no family because both of his parents died. I conclude that his friend kept his disappearance a secret and the government or doves kept this confidential from the public eyes, and nobody worried or is looking for Kaneki. *according to the anime

Kaneki moved out when he turned 18 to get away from his abusive relatives who didn't really like him or want anything to do with him. After his mom died, her life insurance was left as a trust for him, which is where his living expenses came from. Upon graduating from high school, he was able to get the entire thing and moved out to live by himself.

His "family" didn't give a damn about him, and as we find out, aside from Hide, he had no close friends, since he was emotionally distant and withdrawn. Instead, he preferred to read in quiet places by himself, aside from the occasional friends by association with Hide.

However, in the manga, there were missing person flyers posted around after his sudden disappearance1 following his kidnapping by Aogiri. Even Touka didn't know where he was most of the time after that, because he distanced himself from them to protect them, while Hide was actually covering for him, saying he just had some family troubles and wasn't feeling well and just wanted some time alone. The coincidence between the disappearance of Kaneki and the appearance of Eyepatch became an important clue for the CCG to discover Kaneki's identity as Eyepatch. Although Hide had been covering up for Kaneki, once they had made the connection, Hide basically told them everything to try and get them to agree to help him, which was why he was trying to tell Kaneki to give it his all to try and impress the CCG enough to consider him worth keeping around.

1 Kaneki continued going to college all the way up until that point in the manga.

2
Is Aogiri looking for Kaneki now that he's with the CCG?
5
Does CCG Know that Haise Sasaki is Actually Ken Kaneki?
11
Does Kaneki pop his knuckles or break them?
1
What happened to Kaneki in episode 12 of Tokyo Ghoul:re?
3
Can Ken Kaneki from Tokyo Ghoul self cannibalize?
2
What happens after Kaneki carries Hide and meets Arima?
0
How did Kaneki discover Touka was a ghoul?
0
Music of Kaneki vs Arima?
0
What's the name of the background music that plays in Tokyo ghoul episode 1 when Kaneki sees rize for the first time?