Why is Kaneki's fighting ability improved when he put on his mask?

In volume 8 chapter 72, Nishio mentions to Kaneki that his abilities will improve if Kaneki puts on his mask.

As far as I know it's just a mask (with no special power or anything). So why does it increase his fighting ability? 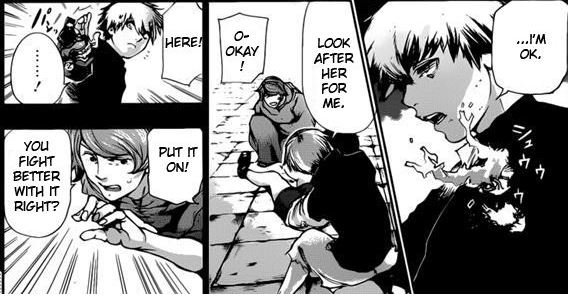 The mask covered Kaneki's nose and mouth. This helps him suppress his urge to eat the opponent by reducing his ability to smell. Remember that Kaneki's ghoul ability is originally Hanazawa Kana's...no wait...Rize's, nicknamed the Glutton for her great hunger.

By suppressing this urge to eat, he can concentrate more on the fight as he's not worried about getting carried away and going berserk.

To protect himself, as a human. By putting on the mask, he's putting on becoming a ghoul and can fight as he must, knowing that by taking it off he can be "human" again and as such he can fight harder with it on. Fighting without the mask means accepting that he is a ghoul if he fights with his full strength, and as such without the mask he'll hold back to try and stay "human".

During his torture however, he came to accept his ghoul half as part of himself, and his mask loses it's meaning, just becoming a means to protect his identity from others then as an emotional crutch. Nishio of course only knowing the old Kaneki, who wanted to hang on to his humanity as long as he could.

(Touka is actually the same, acting far more ruthless with her mask on then she is when it's off, because of her strong desire to be human even though she knows she isn't at all).

most likely weather after touter by Jason or not the mask is basic his gate way into his monstrous Side because of the fact several times through the manga he showed extreme compassion towards all his friends and even some people of the shady sort but as an example when he had it on tearing apart the ghoul restaurant he has absolutely no moral even though the fact there could have bean several there how did not deserve death and even encountering Amon in the anime after he TOOK OFF the mask his abilities were greatly decrease so basically the entire time he still tried to hold on to being at least civil to others and be some one but once the mask was put on he went all out on more than one occasion.

also it is a possibility that he was trying to restrain hi urge to eat but it was on several times uses such as his first encounter with Amon that drove him crazy. also he used the mask as a symbol of his true nature for it was designed directly for him with the eye-patch,liples mouth, and bolts in the neck all to show that he is a monster and as the look says a half bread