What's this manga with girl who does household chores and a guy in piercings and tattoos outside of school? [closed]

Ask Question
Asked 5 years, 6 months ago
Active 2 years, 11 months ago
Viewed 20k times
7
votes
Closed. This question is off-topic. It is not currently accepting answers.
Closed 3 years ago.
Locked. This question and its answers are locked because the question is off-topic but has historical significance. It is not currently accepting new answers or interactions.

I know the title started with an H and I'm pretty sure it was a mash up of the two main characters names.

When they run in to each other outside of school the guy is covered in piercings and has a bunch of tattoos and the girl is basically a house wife always doing chores, cooking and looking after her brother.

I know it sounds lame but it was actually a really good story!

I think Horimiya is what you are looking for.

Most of the descriptions in your question matches the details in the first chapter of the manga.

Hori may seem like a normal teenage girl, but she's a completely different person after school. In her workaholic parents' absence, Hori has been like a parent for her little brother since she was young herself. Between taking care of her brother, feeding them both, and housework, she doesn't have much time for a usual teenage social life. One day, she meets someone else who does not present his true self at school: a quiet, glasses-wearing boy called Miyamura. She'd assumed he was bookish, and possibly an otaku, but Hori couldn't have been more wrong. Outside of school, Miyamura is a friendly guy with many piercings, and he's not very good at academics. Now the two of them have someone with whom they can share both halves of their lives!

Here is the cover of the first volume, which shows both character in their "school mode". Note how Miyamura (the male character) leaves his hair long and has a nerdy look, while Hori (the female character) looks very stylish:

Here is a panel from chapter 1, showing Miyamura in his "after school mode" with plenty of piercing, which he hides by leaving his hair long: 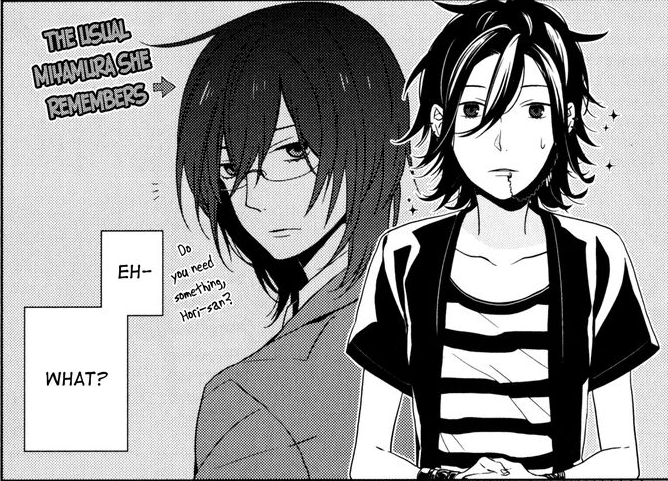 Here is a panel from chapter 2, showing Miyamura's tattoos, which is the reason why he always wears an extra layer of clothes during PE to prevent the tattoos from showing through: 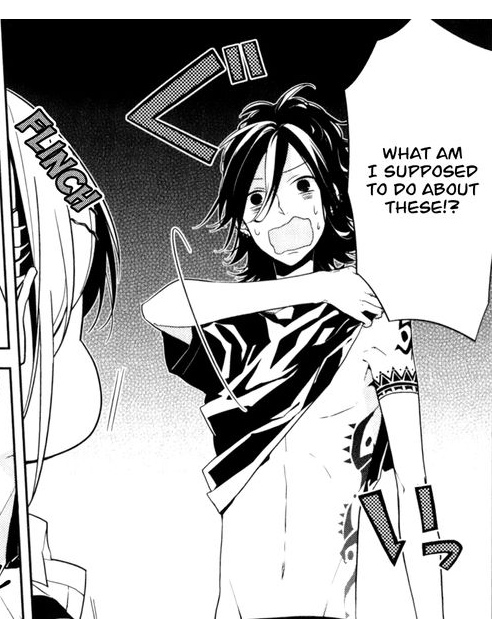 You might also want to check out Hori-san to Miyamura-kun written and illustrated by HERO, since it is the original work that Horimiya adapts from. The art is not as good, though, like the case with One Punch Man's original work by ONE (which looks like it is drawn with Paint) and its awesome adaptation.

Not the answer you're looking for? Browse other questions tagged horimiya or ask your own question.