Who is that at the end of episode 2?

At the end of every episode of Puella Magi Madoka Magica there is an artist's drawing while one of where characters is narrating the next episode preview. In Episode 2 we see this: 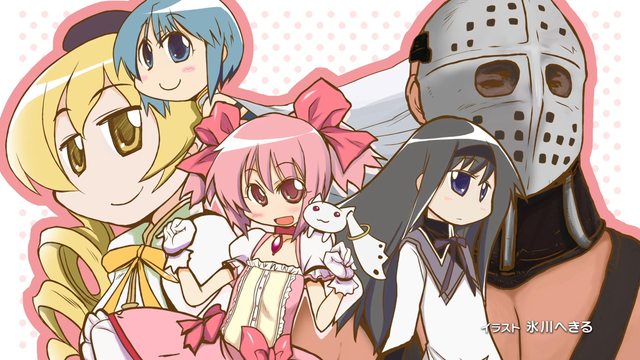 Who/what is that behind Homura? And why is he there?

So, uh, this is kind of weird.

According to a guy on Chiebukuro (which is basically Japanese Yahoo! Answers), the artist of this end card, HIKAWA Hekiru, is a fan of the movie Mad Max 2, and one of the characters in that movie is a dude named Humungus, who is the guy pictured here.

Also according to the guy on Chiebukuro, Humungus has apparently popped up in other works by Hikawa. I'm not familiar with any of Hikawa's works, so I don't know whether this is actually true or not, but the guy in the endcard certainly does look like Humungus.

12
What do the runes that roll (while Connect plays) near the end of the second Madoka movie say?
9
What happen at the end of the third Madoka Magica movie?
18
How did Homura get a bow as a weapon?
6
Why exactly does Kyoko attempt to save Sayaka?
7
Why is there no official character song for Homura and Mami?
7
Where do the terms "Law of Wheels/Cycles" come from?
9
Why was there an apparent violation of the law of cycles in Rebellion?
5
Was the "Cake Song" released in a soundtrack?
3
Why does Homura have to die within her soul gem in "Movie Part III: Rebellion"?