Why is Erza able to feel pain during Kyouka's fight?

Don't read the question below if you are not up-to-date to the Fairy Tail manga. It may contain spoilers

In the chapter 399-400 from Fairy Tail manga, Erza is fighting Kyouka to stop faces's activation.

During this fight, Kyouka used her curse to increase Erza's sensitivity to pain.

After this curse, she used another one to remove all Erza's five senses. But Erza continued to fight. 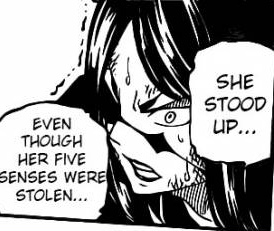 One of the five senses is tactile perception. Without it, she should not be able to feel anything, including pain. Shouldn't it make Kyouka's first curse useless?

But somehow Erza continued feeling a lot of pain and suffering a lot.

How can she feel this amplified pain since all her senses were stolen?

I think that's the reason pain is NOT stolen together with tactile perception (well, I thought, before I looked deeper, pain is connected to the touch sense, but it seems not).

These are 5 base senses (for more info, view this article). As you can see, pain is not listed. But there are others like:

she can curse to increase Erza's sensitivity to pain

she remove all 5 senses from her in other curse.

Pain is not a base sense.

9
Why did Erza challenge that many monsters at the Pandemonium?
8
Why can't Mirajane fight after Lisanna's death anymore?
7
Why are not all Exceeds able to transform into an anthropoid (humanlike) form?
5
Why we rarely see magic circle during battle in Fairy Tail : Final Series?