Why does damaging something sometimes make it more powerful?

For example, the end-of-season fights in Dragon Ball Z, the fights between the Eva and the Angels in Neon Genesis Evangelion. I've noticed it in far more things but these are the most recent in my memory.

When a fight is occurring, the more damage which is done to something, even if it is mechanical, the more powerful it (sometimes) becomes. That doesn't make any sense to me.

I would prefer an explanation which relates to Japanese culture, if such a thing exists (for example, the reason why anime has a lot of characters / machines with weapons attached to their arms is because the Japanese are of the view that weapons are an extension of the body, not something to be picked up and thrown away like a pistol in an American action movie - that kind of thing). However, any insight at all would be great!

Well in both cases you cited it relates to released energy that was somehow blocked because of the danger of its release. In Dragon Ball, I remember the scene near the end of the fight with Frieza where Goku tells Gohan something like this: "If the forces inside of me start unleashing, it will destroy this planet. You have to get out".

In Evangelion, we learn that the armor of the Evas are actually blockers to prevent them from going berserk, also hiding the true nature of the Evas, that they are composed more as a human would be, with skin, flesh and organs, than as a robot. 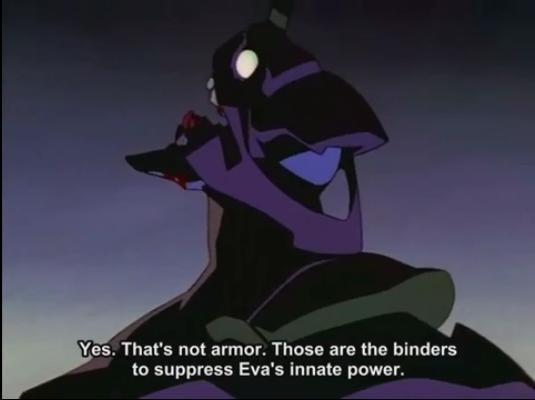 So these two things are common: the released energy that comes from hard, critical situations, near death experiences, and the revealing of the true nature of something, the dark forces inside all of us. I think it could be symbolic of the awakening of the unconscious part of the self.

In real life, when your muscles get worn and slightly torn up from use, after you rest and recover, they will have grown back stronger.

There's a word for the practice of purposefully wearing down your muscles to cause this phenomenon to happen. It's called "exercise".

What you're seeing(or at least in DBZ), is an exaggerated version of that.

3
Why does Lupin have both prowess and infantile behavior when it comes to women?
8
Why does Rin have cat-ears?
9
Why does Super Sonico always wear headphones?
1
Why do bad/evil characters sometimes have no eyes?
2
What's with the fantasy hair?
2
Why does Rin in blue exorcist have an eye bigger than the other when uncontrollable?
11
Why do the stronger enemies in anime/manga tend to look more human?