When is Kirino Kousaka's birthday?

I'm just curious because Ruri's birthday was mentioned. Kirino's birthday might probably mentioned in some part of the light novel or manga.

Her birthday is April 8. It can be seen in this birthday plate that was revealed during Tsukasa Fushimi's 10th anniversary live streaming event.

I did some searching back when this question first appeared and came up with nothing. Given that Kirino is such a major character, I find it hard to believe that her canon birthday would be so hard to find, so if her birthday was ever published, it was probably in a non-canon source. It also seems probable that if her canon birthday had been published, the anime producers would have used it in the image that Oshino Shinobu linked to, instead of just the year of her birth.

I tried a few different Google searches and found this same question (unanswered) on other sites. I used Ctrl-F to search the terms "birthday", "birth", and "born" in the novels, with pretty much no result. I was relying on memory and wikia for the anime, but the anime generally doesn't include anything that wasn't in the novels. I haven't read the manga past Volume 1, or played the visual novels, so I didn't search them at all. However, I have doubts about the value of a birthday that only appears in the manga or the completely non-canon visual novels.

It is possible that I missed it in the anime or that some guidebook published as a bonus gift for people who preordered the laserdiscs in Japan contains the date.

Okay this is really it. From my own findings, i was able to conclude that Kirino's birthday is September 4, 1997.

From the image provided by Oshino Shinobu, I was able to get her birthday from her profile. It says 1997'4 生ま九. This probably means that she was born on the 4th day of the month of 生ま九 in the year 1997. I tried translating it with google translate but it says "Raw or nine" in English. I think I have probably made a mistake in identifying the first two characters correctly. But the important thing is the third character, 九, which translates to "Nine", probably the 9th month of the year, September. So I deduced that Kirino Kousaka's birthday is September 4, 1997. 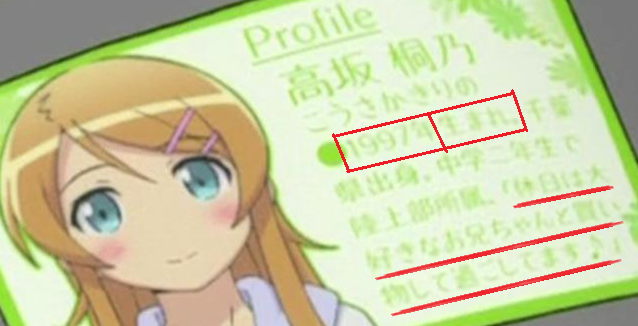 2
Who is the new girl in Kirino's group?
5
Did Saori also have feelings for Kyousuke?
7
Are the Oreimo light novels different from the Anime?
1
Is there any meaning behind Kirino's octopus plushie?