Who is Ruby Rose's father?

Yang's mother is unnamed as of Season 2. Ruby's mother is Summer Rose, who is Yang's step-mother.

I have two theories as to why Ruby is Ruby Rose not Ruby Xiao Long.

Summer Rose was insistent that her name be carried on, and so Ruby was given the surname Rose. As Memor-X has said in the comment, a husband taking a wife's surname isn't all that rare nowadays.

It was a convenient choice for the writers - Ruby and Rose are both very vividly red items, whereas Yang Xiao Long can be translated as Small Dragon of the Sunshine or Little Sun-Dragon, reflecting Yang's powerful, fiery personality & battle ability quite well.

Theming the characters with their colour seems to be quite important in RWBY - For instance, check out their pajamas below - Yang has a fiery heart on her tank top, whilst Ruby has rose-patterned bottoms. 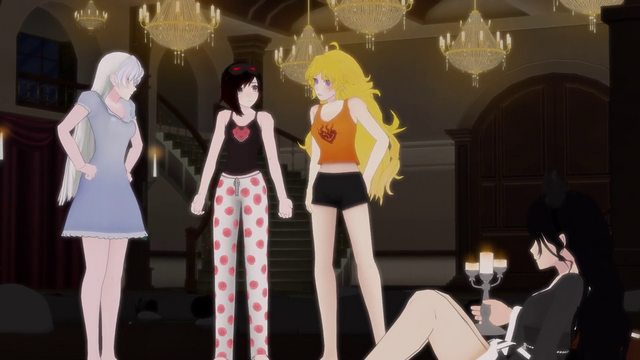 I suspect we may find out more if/when Yang's mother's identity is revealed.

In later seasons, it is stated that Raven Branwen, Qrow's twin sister, is Yang's mother.

Still, it's the top result when you ask Google about Ruby's lineage.

It's possible that Neo can be part of Yang's family.

I have a theory that Summer Rose is Ruby Roses's mother and Raven (last name:??) is Yang's mother (obviously!). I believe when Raven went on that mission so long ago (after she gave birth to Yang, of course), something came up and caused Raven to stay out on her mission for years to come. That lead TaiYang to believe that Raven had disappeared or died. Then, he took his old teammate Summer Rose and married her and got Ruby,

When Summer died, I think he thought he was a lone man raising two children and his brother (Uncle Qrow) to help, so he didn't want to marry again because he didn't want his heart to be broken once more. And I don't feel like Neo would be part of the family. It may be a coincidence that somehow they both bought the same necklace, but no one knows for sure. Thus, leading up to my Theory. Again, this is a theory and I may be wrong.

The Qrow being Ruby's dad has been debunked by RT. And besides, it'd be an unnecessary plot twist.

They confirmed that Tai and Summer had Ruby. Qrow was just her teacher and mentor.

Even though RWBY takes place in a fictional world called Remnant, it's basically a more awesome Earth, with the same calendar type, and possibly the same legal systems as Earth. It's possible that if it follows domestic laws, that the parents may choose the last name for their child, and the wife doesn't have to take the husband's name after marriage. It's possible that they loved the name 'Rose' for their daughter Ruby, due to it sounding a bit better than 'Ruby Xiao Long' (and Yang Xiao Long translates to 'Sunny Little Dragon', and 'Ruby' doesn't fit the chinese theme, lol).

I don't have a direct source, but Miles and Monty stated that the "Qrowdaddy" theory is false. First time was in an RTX panel (forgot the date, but it was before Monty passed, because Monty said so himself that Qrow isn't the father), and second I know was in a Reddit post by Miles.

As for the domestic laws in real life (at least in America where I live), even though it's the norm, the wife after marriage doesn't have to take the husband's name. They can keep their names, and in some cases the husband may take the wife's name, but those are somewhat rare.

And for the child's last name, they can choose whether they want the child's surname to be the husband's or the wife's. So, if the countries of Remnant have the same laws and policies as our world, my speculation is that Tai and Summer may have named her 'Rose' because of this, as well as 'Rose' complimenting the name 'Ruby' quite well (Just a theory on that one). And as I've stated before, 'Ruby' doesn't really fit the Xiao Long name.

I learned these laws from my history teacher, who used to go to law school (he could be a lawyer, but instead he chose to be a teacher. lol)

I think Qrow is Ruby's father.

Maybe he doesn't want Ruby to know because he is on a dangerous mission, and if Ruby know, she will obviously go. Maybe Qrow left Ruby for that reason and therefore, Qrow is probably Ruby's father.

I'm thinking maybe last names aren't that important in Remnant. Like it doesn't matter if the child takes the mother's last name, if the wife doesn't change hers, or if the husband takes the wife's name.

Weiss's father took her mother's last name, so they might not follow the same traditions we do. Or perhaps the last name Rose has special significance, so they decided to pass it down to Ruby.

Since RWBY is meant to be (mostly) family friendly, I'm not sure why the writers would include characters having premarital sex so openly. I know Rooster Teeth has made the show a little dark and more mature recently, but with the exception of a couple innuendos here and there, they've stayed away from the topic of sex.

0
Who was Headmistress of Beacon versing in Episode 1: Ruby Red Rose?
2
Was it a katana?