I think I saw this movie about a year ago, but I can't remember much of it and only watched part of it.

It started off with this guy in hell, and he met this young boy and the boy said something like the guy had been lucky and had been given another chance in life to redeem himself.

He then wakes up in a hospital as a boy who I think was in middle or high school - he had committed suicide by overdosing and was supposed to be dead, and the guy had taken over the dead body.

The now reborn boy was good at art, and his family gets worried about him as he doesn't talk with them after overdosing - I think it was said that he didn't talk much before, though.

The young boy that told the guy that he was going to be reborn follows him around, and the guy is the only one who can see him. The guy speculates a lot about whether the young boy is an angel or devil, and tries to find out what the now-dead boys life that he inherited was like.

I think the guy - when reborn as the boy - was wearing school clothes a lot of the time, and had short brown hair. I don't remember what anyone else looked like, as what they were wearing was pretty plain.

From what I remember, the art style was plain and didn't have much colour, I think everything was pretty saturated.

I believe you're looking for Colorful.

"I" died and was kicked out of the cycle of reincarnation because of the sin "I" committed. An angel told me that "I" won a lottery and he gave me a chance to remember the sin. My spirit possessed the body of the 14-year-old boy Makoto, who committed suicide and "I" tried to recollect my memory. "I" felt distressed by the terrible circumstances of Makoto and the fact that "I" was borrowing his body. "I" have started to realize that people are hurting each other because the world is too colorful to distinguish the true color of themselves from others. 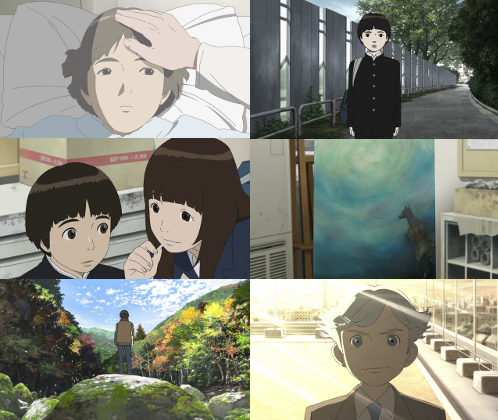 Not the answer you're looking for? Browse other questions tagged colorful or ask your own question.