I notice that a fair number of people (e.g. on reddit) refer to Kazami Yuuji (protagonist of Grisaia) as "Juicy Yuuji". Why? What's so juicy about him?

Also: I haven't noticed anybody in the anime (up through episode 4) refer to Yuuji as "juicy" or anything of that sort. Is the "Juicy Yuuji" nickname (or some Japanese equivalent thereof) used in canon (e.g. the visual novel) at some point, or is it purely a fan invention?

In the Visual Novel (not sure about the anime), there is a scene in which Michiru and Makina start a conversation with Yuuji. Specifically, Michiru complains to Yuuji that he is hard to talk to because he gives off a certain aura. She then suggests that they give him a nickname to make him easier to talk to, similar to how Makina calls Michiru "Chiruchiru". Yuuji says that they're free to call him whatever name they like, though he doesn't see any need for a nickname.

Michiru then makes her first proposal for a nickname 「ザ・近寄り難い人」, which literally means "The person who is difficult to approach", or as the fan-translation says, "Mr. Standoffish man". Neither Makina nor Yuuji is very happy with this name, because it's not exactly easy to say.

They go back to brainstorming, and Makina comes up with the second suggestion: "Juicy-Yuuji". Michiru isn't happy with this; she agrees that it sounds nice, but doesn't see what part of Yuuji is "Juicy".

After this, Yumiko comes by asking them to be quiet. She ends up getting roped into the conversation, and Michiru asks her to come up with more names. She first agrees with "Juicy Yuuji", but then offers as an alternative "Yujiyuji". After Michiru laughs at this, she exits the conversation.

In the VN, Michiru then forces the decision on Yuuji as to which nickname he wants. You have the choice of any of those three. 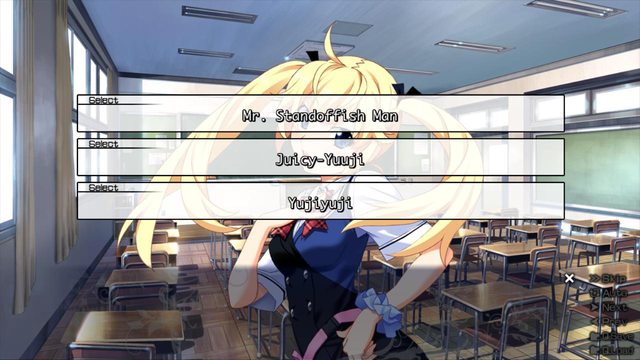 After that, for the rest of the scene you're referred to by that name. However, Yuuji decides to get back at Michiru by giving her an equally terrible nickname. Eventually he ends up selecting "Mitcher", which Michiru finds to be very unpleasant. He continues on a rampage, giving Sachi, Amane, and Makina the nicknames "Satcher", "Atcher", and "Matcher", until Michiru apologizes and pledges not to use the nickname you chose.

The choice never has any impact on future events in the VN, and none of the main events from that scene come up again in the future as far as I can remember, but I guess this nickname became popular in the fan community.

Not the answer you're looking for? Browse other questions tagged grisaia .

8
Why does all of Grisaia anime series have a weird video format?