Why is Kitamura called "Maruo" by Kihara?

In the Toradora series, only Kihara seems to address Kitamura as "Maruo". Why is this? Why is she the only one who calls him Maruo? Is "Maruo" the real nickname of Kitamura? Do they have a special relationship or something? Are they childhood friends?

Well, it isn't just Kihara who calls him "Maruo" - many of the girls at school call him that. In the light novel, it's pointed out early in volume 1 that various girls call him "Maruo" to be cutesy. In the anime, we see someone (I can't tell who) calling him "Maruo" in episode 14 near 4:40; and later, around 15:15, NANAKO Kashii refers to him as "Maruo" during a conversation with Kawashima and Kihara

Anyway: the reason he's nicknamed "Maruo" is that he bears a striking(?) resemblance (as Kihara notes in episode 2, around 5:00) to the character MARUO Sueo from the 90s-era show Chibi Maruko-chan: 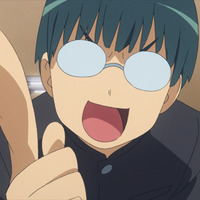 The resemblance apparently extends beyond the visual - I haven't read/watched Chibi Maruko-chan, but Japanese Wikipedia states that Maruo, like Kitamura, is one of those do-gooder class-president types.

There's no explicit mention of this in the light novel (unsurprising, given how weird Japanese media is about referencing other media - whence cometh MgRonald's), but some scouring of the Japanese internet suggests that the reference is fairly obvious to those who grew up while Chibi Maruko-chan was a popular thing.

Not the answer you're looking for? Browse other questions tagged toradora .

9
Why is Toradora's ED about oranges?
3
Why does Minori have a flower on her head?
5
What did the Sailor Moon reference mean?