Why doesn't Korra bend the metal on Kuvira's uniform?

In the latest episode (S04E06, "The Battle of Zaofu") Korra fights Kuvira who wears the following uniform 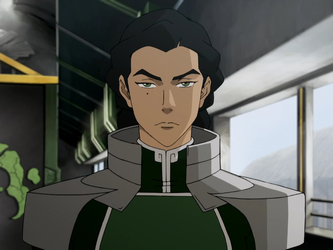 In the linked article it is also said that

While leading her army, Kuvira took to wearing a uniform with metal strips on her back, biceps, and calves, for which she developed a style of metalbending that involves bending the metal on her uniform and shooting them off of like projectiles.

Now I was wondering: Can't Korra bend the metal on Kuvira's uniform and chain her (or subdue in another way)? Is this due to the fact that Kuvira already has control over the metal (as described in the wikia article)?

I don't think there's a canonical explanation of how bending works, but the way Earthbenders fight suggests that they have much more control over soil that's near them, and that they work best with sudden, abrupt movements. For instance, it's common for earthbenders to stop large slabs of rock, but they always wait for it to get close rather than slowing it gradually from a distance. Most attacks originate from the bender, and when they act on distant earth it's usually to throw their opponent off balance rather than injure them directly. There's almost no instances of earthbenders pulling rocks as a form of attack.

It's also shown throughout the series that bending heavy loads is not unlike physically lifting them; it's usually done much more slowly and the weight of the rocks causes resistance against the bender's movements.

It's likely that Korra could bend Kuvira's armor, but it would be impractical to do so from the distance they kept from each other while fighting. This seems to be supported by the fact that in the season finale, after slamming Korra against a wall, Kuvira pulls out three chunks of metal from it and brings them close. She then launches small bits of the chunks at Korra very quickly.

It appears Kuvira felt she couldn't have attacked Korra directly using the metal in the wall, or using larger chunks of metal, without a high chance of Korra dodging or using a quicker attack in response. By that same token, I imagine if Korra tried to throw Kuvira from a distance, Kuvira would easily hit her with a small piece of metal before Korra completed the throw. And considering they can both react to small projectiles traveling at high speeds, I doubt Korra would've been able to bend a large amount of metal and surround Kuvira with it quickly enough to actually trap her either.

Korra more or less could bend the metal on Kuvira's uniform, as long as she knows the exact type of metal. However, it would be pointless to do such thing. An example would be: If Toph was an earthbender and so as Dai Li's force, then Toph should have subdued them through earthbending like enclosing them in a rock or in a statue, which of course Dai Li can always fight easily being the earthbender itself. The same is applicable for both Korra and Kuvira - both can bend metal, so neither can really overpower the other just by chaining.

3
Why can Korra bend 3 elements from the beginning?
2
Why does the Avatar Cycle go Fire, Wind, Water and Earth?