Why did they censor the word spam?

On OVA episode 2, when all the girls went camping, Yukari showed her collection, rations from different countries, some of Rabbit Team girls started to yell *pam, *pam, *pam, which is I guess come from word spam. But why they censored the word? How could it become something like "eggs, bacon, sausage, and spam"?

Apparently, it's a parody from a popular Monty Python sketch titled "Spam". It's about two customers who order a breakfast from a menu that includes Spam in almost every dish.

As usual, a lot of other shows also have to censored some brand or replace it with similar names to the real-life brand, so that the producers can avoid copyright issues. Some other show also tend to censored part of the show if it's a parody to other show for same reason.

And this is a picture for comparison in case if the video is removed: 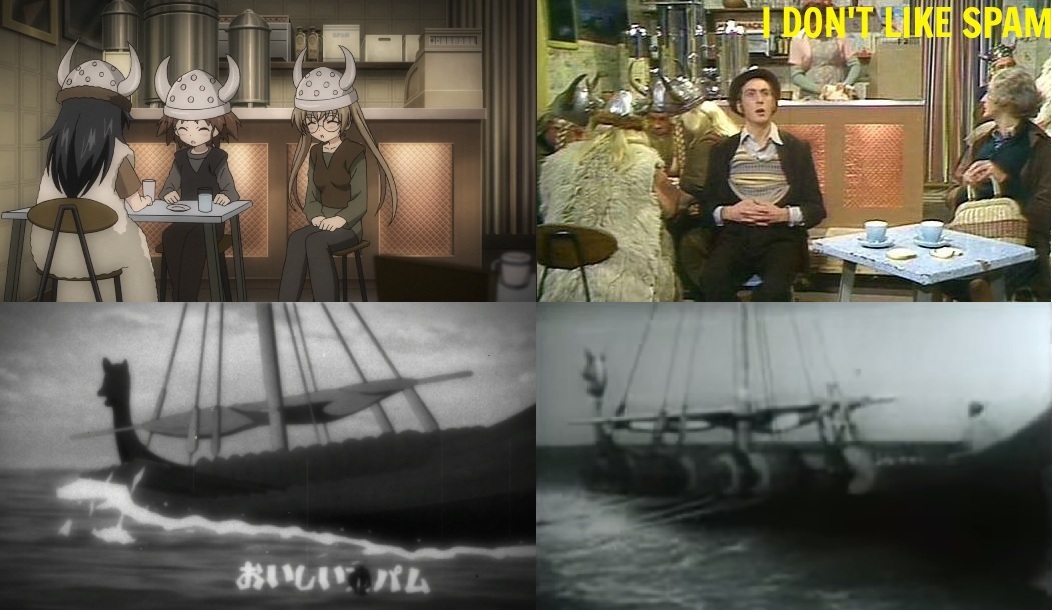 Spam is a brand of several canned precooked meat products made by the Hormel Foods Corporation. It was first introduced in 1937 and gained popularity worldwide after its use during World War II.(1)

Spam was used by U.S. military occupation after World War II into Guam, Hawaii, Okinawa, the Philippine Islands, and other islands in the Pacific as one of their military food.

The term spam in the context of electronic communications is derived from this sketch.(2)

SPAM® is a registered trademark by the Hormel Foods Corporation.

As you might have noticed from other productions, Anime usually change or censor any real-world trademarks which appear.

Not the answer you're looking for? Browse other questions tagged girls-und-panzer or ask your own question.

4
Name of the song in Girls Und Panzer
4
What is the relation between the Girls und Panzer manga and anime series?
3
How do they decide if a tank is eliminated or not?
6
What did the girls from Usagi Team watch on Final Eve?