Does Izumi Shinichi's parasite suffer from a lack of power because of his injury?

After his parasite completely heals his heart and regenerates his arm, does Migi lose any abilities except the power to locate other parasites when he's asleep?

I suppose you know this already, but to be clear, Migi does not just lose the ability to locate other parasites when he is asleep, he is completely dormant and unable to wake up and react to danger during the sleep. The information about his weaknesses is given by Migi himself on Page 190 in Volume 2: 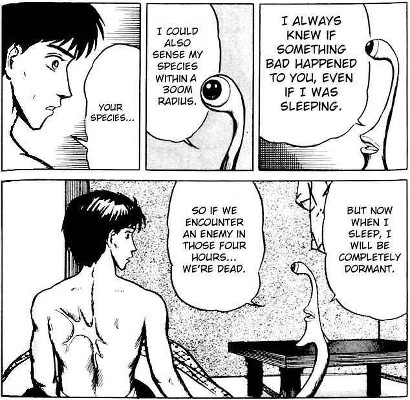 Interestingly, a 70% Migi could still sense other parasites within a 300m radius after the incident (for example, in Volume 3, he detected the presence of the parasite murderer 300m away) and a 30% Migi inside Shinichi likewise enables Shinichi to see 300m far, so I see no loss in either power or ability by Migi after his "injury".

The conclusion is Shinichi's parasite Migi does not suffer from a lack of power because of his "injury" other than the weakness mentioned by Migi in the picture above.

After being 'mixed' with Shinichi, Shinichi became more parasyte-like, while migi became more human-like. This caused him to enter in 'deep sleep mode'. When he's in this mode, he won't only be able to locate other parasytes, he won't even be able to help Shinichi if he's in dangerous situation

Not the answer you're looking for? Browse other questions tagged parasyte .

12
Why is Parasyte spelled with a y in the title?
2
Could Kana really tell Shinichi's Migi apart from the other Parasytes, or was she just delusional?