What are the paintings in the Anti-Angel Headquarters and what do they mean?

Here is a partial list available on Wikia. What do the ever-changing paintings mean and how are they connected to the episode's or the overall plot? For example:

In the OP of Episode 4, hung on the side wall is the painting with the kanji [鎮魂歌]【ちんこんか】, which means requiem. The painting alludes to both the album Requiem for Innocence by Sad Machine that has a profound influence on Masami Iwasawa and her disappearance at the end of Episode 3.

Directions with respect to Yuri's perspective, where the front is facing the entrance. For the sake of completeness, I also include the paintings that are fixed across episodes.

Front: School song of the Heaven Academy. The song lyrics reproduced below reference this yahoo answer and this wiki page.

Back: Portraits of all past principals of the Heaven Academy. The portrait of the current principal has been replaced by Yuri's.

Left: During the operation meetings, the banner of the SSS Brigade is hanged on this side of the wall.

Note: Jun Maeda, the original creator of Angel Beats!, is from Mie. 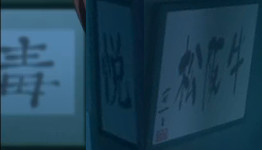 Front: [毒]【どく】 — Poison. I believe it's intended to invoke the expression 「お気の毒に」, meaning "my condolences", as said by Angel about Hinata in episode 5. By Jun's arrangement or by coincidence, Hinata was forced into sacrifice in an arithmetic progression of episode number 2, 5 and 8.

Front: [嫁]【よめ】 — Wife; bride; (one's) daughter-in-law. Don't know if this has anything to do with 俺の嫁 〜あなただけの花嫁〜 or not. 俺の嫁 is a love adventure game released in the same year as Angel Beats! and sharing some of the voice actors (Emiri Katou, Kana Asumi, Eri Kitamura and Kana Hanazawa).

Left: [諭吉]【ゆきち】 — Yukichi Fukuzawa, the guy on the 10,000 yen banknote. Yukichi is the nickname of Yuuki Hashimoto from the 2010 eroge 恋色空模様 who is also voiced by Harumi Sakurai (Yurippe's voice actor). Moreover, "Farewell, Yukichi" (「さらば諭吉」) is the defining quote of Kyousuke Natsume from Little Busters!, another visual novel written by Jun Maeda.

Right (OP): [鎮魂歌]【ちんこんか】 — Requiem. Its significance has already been explained in the question.

Front: [脇]【わき】 — Supporting role; the second stanza of a renga. Yui changed her role in the band from support to lead after Iwasawa left the Afterlife World. At this point in time, the story has also entered its second phase in the hokku→waki→daisan→ageku renga structure or the introduction→development→twist→conclusion Kishoutenketsu structure.

Right: [逆鱗]【げきりん】 — A scale grown upside-down below the chin of a dragon that will anger the dragon when touched; imperial wrath. Yuri's underlings incurred her wrath by failing their mission of defeating Angel's team in the baseball tournament. There is also the angered dragon conjured up in Otonashi's mind in episode 7.

Front: [謎]【なぞ】 — Enigma; mystery, i.e. Ayato Naoi in this episode. If you turn up the volume just after Yuri throws her second tantrum, you can also hear a 'mysterious' voice saying "what's with her?" (「なんだこいつ」). This is documented under the 謎の声 section here. 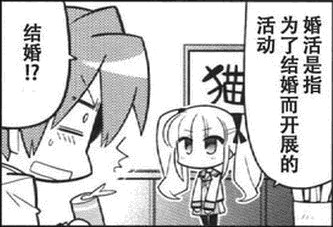 In this panel, Yusa is explaining the term "marriage hunting" (婚活) to Hinata. The true meaning of 猫大陸 still eludes me, but if I were to fashion a guess, it would at least be somewhat related to marriage hunting, which reminds me of the missed opportunity in this episode for Otonashi to do, I mean, to become closer to Kanade, and the fact that the 'marriage hunting' was initiated by Naoi on behalf of Otonashi, too! 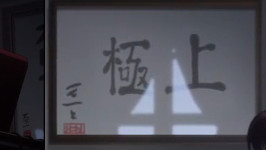 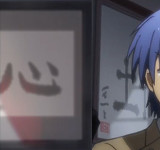 Front: [心]【こころ】 — Heart. Lots and lots of hearts on the computer screens.

Right: [東]【とう】●? (Not legible). It would make more sense if the character is [転]【てん】, though, as that means "altering pronunciation or meaning". 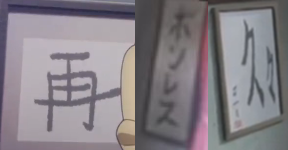 Right: [久々]【ひさびさ】 — (in a) long time; long time (ago). It's been almost 5 years since the last Angel Beats! episode was released.

7
What are the "specs" of the afterlife world?
8
How can they tell the difference between NPCs and humans?
4
How does the Angel Beats special episode connect with the main storyline?
4
Is there any connection between Otonashi and the first NPC?
5
Why did Angel and Otonashi want to pass on and make others pass on?
6
Who is the mysterious Programmer of Angel Beats?
7
What do the "Beats" in Angel Beats! mean?