Is there any humor or meaning to the conversation about Yuri's dream and how many Hinatas there were?

In episode 5, Otonashi and Angel had a conversation about Yuri's dream and how many Hinatas there were, which seemed totally random and out of nowhere. When I first watched that episode, I didn't get the humor and meaning that I expected were there in the conversation. Is there a joke or meaning to those remarks, or are they just some disposable lines?

The curious conversation between Otonashi and Angel

Otonashi: Sorry! Yuri's a little emotionally unstable. Because last night, Hinata showed up in her dream and—

Otonashi: That's what he said, and Yuri just proved it.

The joke here, I think, is that before this conversation, Hinata showed up in front of Yuri and behaved very differently from yesterday (before Yuri dreamed about him), so Otonashi said that the warning came true: Hinata really changed. Since Hinata said, "don't think that the me from today and tomorrow will be the same", tomorrow, he might change again, making Kanade say that there could be more than three of him.

The conversation actually foreshadows a future event where Angel makes an aggressive clone of herself using Guard Skills: Harmonics.

Are there two Hinata-kun's? Is there a chance that there's more than three of him?

In episode 8, Hinata reciprocated this saying to Angel, which is in itself a gag. 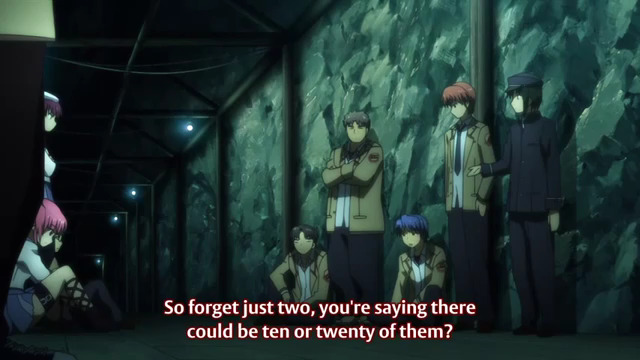 Don't think that the me from today and tomorrow will be the same. Watch out.

This is what the SSS members were worrying about in episode 9: which "Angel" would wake up from the coma after Kanade had absorbed all her clones? 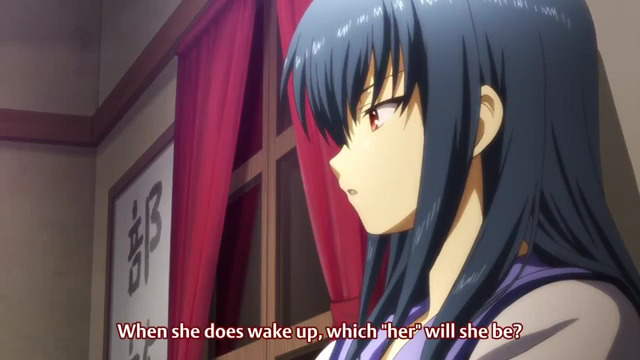 I'm sorry to hear that. (お気の毒に)

The second kanji character used in Angel's expression of pity, 毒 ("poison"), was actually shown right at Hinata's face in episode 2, the last time he was made to be sacrificed by Yurippe. In episode 5, he had to make his sacrifices again at the coercion of Yurippe, but don't worry, the maxim "people die if they are killed" doesn't apply in the Afterlife World. 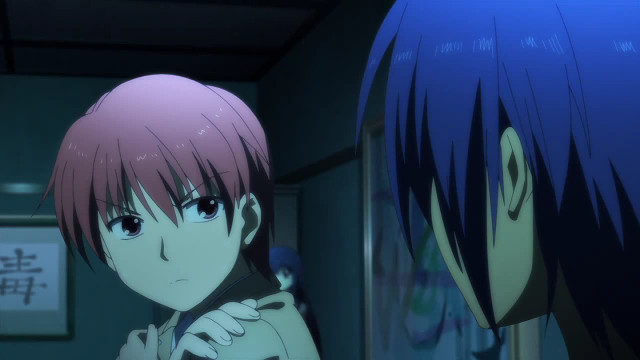 The humour here is that Angel's basically saying having one Hinata is bad enough and she is sad to hear there is more of him.

There's a misunderstanding here where Hinata is saying that how is personality is one day is different to how it is another day. Angel has mistaken this as being two distinctly different Hinatas .

8
How can they tell the difference between NPCs and humans?
5
Is there any connection between Otonashi and the first NPC?
5
Who is the mysterious Programmer of Angel Beats?