Does Sidonia no Kishi's 256 frame formation have scientific advantages?

In episode five or six of Sidonia no Kishi, Tanikaze and Shizuka were rescued by their fellow knights against orders of the captain. The rescuers adopted a 256 Gardes formation traveling to and from the protagonist's location. Is the scientific reason behind this peculiar formation explained anywhere in the series (because I can't recall)? 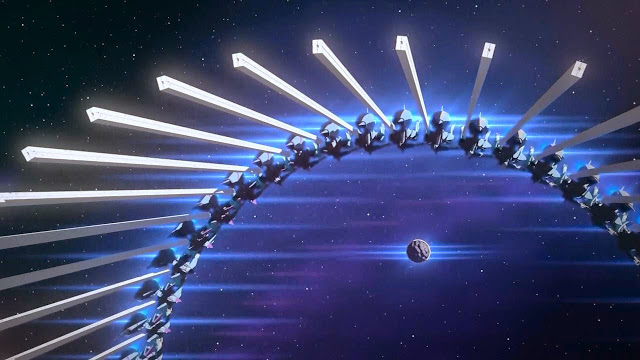 Their formation was a perfect circle when they traveled to Tanikaze's location but was uneven as they carried his frame, hence balance might be out of the answer. This formation was also used later in the series when they were going to attack the massive Gauna (as the picture shows). They used all 256 for the formation but still, the mission-grouping were in 128 frames per objective.

I don't think this question is a duplicate of this question because I'm asking for the scientific explanation of the formation. I'm also aware this question may be put on hold or closed as too speculative, but it's an interesting thing to ask if the explanation is in the series anyway.

I believe krazer's explanation to the question above (as ton.yeung comments below) is on spot after a little research. However, what I really want to know is the benefits in having everyone in one giant ring when they could create two 128-frame rings that would've been apt on the later event I mentioned. They could even have 64 4-frame rings that might cover a greater area in the long run (or not). Does it save energy, minimize danger, or perhaps guarantee a lesser chance of being lost in space?

Having studied orbital dynamics and aerospace engineering, I can simplify your answer down for you.

Let's just say 1 mech exhibits a mass of about 5 units. However, the engine can lift up to 10 units, so in a 2-mech clasp formation:

This means that they effectively double the output of their engines. So, the thrust of a 256-unit clasp formation, and let's also include the weight of one broken mech:

This would give them an extremely long range compared to the distance only 2 or 4 mechs could fly.

To answer your question as to how they would balance it, simply cut the engine of 1 or 2 other mechs in strategic locations

This may just sound like I'm saying they can lift more, but the point is the amount of thrust generated exceeds the thrust needed to lift all of the units' mass, thus translating to more speed and range

Hope this clears it up for ya!

There appears to be a lot of confusion in the answers provided thus far...

What we care about here is rate of acceleration.

The thrust to mass ratio for 1 unit is identical to n number of combined units (256 or otherwise).

Therefore there is no acceleration advantage to combining units.

Example: Assuming a single guard has a thrust of 10 and a mass of 1 then:

There simply is no advantage with regards to raw acceleration performance nor maximum speed (assuming the vacuum of space of course).

There are also no special relativistic considerations since the units do not ever accelerate to anywhere near the speed of light.

On the flip side, combining multiple units together would have major structural disadvantages with regards to high-rate manoeuvring outside the axial line of thrust - that is, the circle would want to tear itself apart in turns...

Additionally, from a tactical perspective, it makes no sense to maintain tight formation if the potential of a surprise attack is a possibility.

w/ regards to carrying a wounded or damaged mech home, that would be advantageous as the broken mech would just be extra mass for the formation to carry - which would limit the acceleration of the group as a whole but might get the broken unit home...

I'm not 100% sure about the intent of the original question. I know what mine was and what caused me to go looking for an answer, is "within the framework of K.o.S., what are the advantages of the large clasp formations?". Clearly, using classical physics there is no particular reason why a 256 clasp formation would have any benefit for speed or range other than some of the minor items touched on in this thread (ie communalization of resources, distribution of tow loads, possibly control, distribution of weaknesses, etc.). So if the original question was about how realistic physics applies to the situation, there's your answer. Also, for whoever answered that balance doesn't matter in space, that's not true at all. Any unbalanced load would quickly cause rotations on all unbalanced axes, which would immediately cause either a need for a course correction or an extreme error in course. Clearly what would be required would be a course correction and that requires thrust, which would significantly reduce their range. An unbalanced thrust (load) in space is extremely inefficient and a lot of work is done to ensure symmetry of thrust in realistic physical situations. As for my original question, it appears that within the physics of K.o.S., there are these fictional particles called Heigus particles which have different properties than described for any particle in normal physics. According to the description above from the wiki, the Heigus engines work much better when used together, clearly balance is still of primary concern, but equally clear is that the physics of K.o.S. Can not be adequately described using our rudimentary knowledge of Heigus physics :-) The next question for me is, "is it described in more detail in further or other K.o.S. Episodes or manga?" Would be very interested to know the answer to that if anyone has input as I have not read the manga.

Only thing i could think up to justify it, was if the individual units burned a lot of energy by stabilizing their flight pattern. With the placement of the propulsion unit high on the back and a bit backward, the main source of propulsion is way behind the center of mass, which makes for a rather erratic flight pattern without having a lot of stabilization thrust. So assuming that a lot of energy is burned for the sake of stabilization via other thrusters, then having units join together spreads out the sources of propulsion, and also stabilization, while the center of mass would stay in the center of the formation (depending on how tightly they’re holding hands, which i assume is meant to be rigidly locked)

If that’s the case, then virtually all if the energy that was previously being used to stabilize the flight is now being used purely for thrust.

Although, If that’s the case, i don’t see how a 256 unit formation would have much advantage over a 48 unit formation, any difference would be slight.

The first thing you need to realize is that there is no gravity in space, so the formation doesn't make any difference in terms of balance. What the formation does is allowing all the guard ships to see each other and use minimal energy to reach a much higher propulsion. When you take gravity and air resistance out of the equation, such formation is one that makes the most sense in the series. Plus, in my own opinion, even though it's never mentioned in the manga or anime, I believe when the clasp formation is completed, one or two primary pilots control the thruster output of all connected ships. It's not to far-fetched to believe so with their technology, as they probably have a computer auto-piloting.

Guardians are immensely fast and can multiply their speed by gathering in a clasp formation. By linking their Heigus engines together, they can reach significant fractions of the speed of light, as shown when Sidonia is engaging the Gauna around the Lem system.

Not the answer you're looking for? Browse other questions tagged knights-of-sidonia .

5
What is the significance of the rescue of Nagate and Shizuka by 256 Guardians?