An anime about human protagonists travelling with monsters, among them are a blue wolf, and a big eye on a leg monster [closed]

The anime is about humans and monsters. The main character has companions which are human and some monsters. These monsters include one blue wolf with horns and some white fur on his chest (it walks on all four), and another one is this big eye on a leg (light green), with a big tongue. I think the eye monster can roll up to attack the foes.

I saw it on TV around 2006/7, but it may be older. Reason I didn't watch it at the time was because it was aired in Irish (which I didn't speak, or in Japanese with Irish subtitles).

It is probably Monster Farm: Enbanseki no Himitsu, known in America as Monster Rancher. 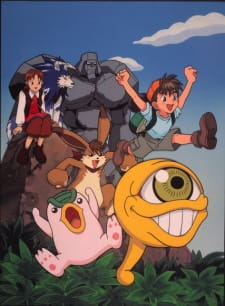 Genki is a boy who loves playing video games. One day he's zapped into the world of Monster Rancher and meets the girl Holly and the monsters Mochi, Suezo, Golem, Tiger and Hare. Together, they are searching for a way to revive the Phoenix, which is the only monster capable of stopping the evil Moo.

The wolf is Tiger of the Wind "Rygar" 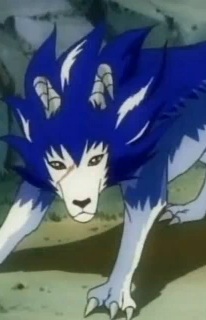 A blue, wolf-like monster with horns on his head. He is a feared thief and bandit known as "Tiger of the Wind". He was the leader of a pack of rogue mixed-breed Tigers that were isolated from all humans. Eventually, he met up with Genki. At first, he looked down upon Genki's optimistic and caring nature. Tiger had a rough past that changed him forever, giving him a jaded and cold view of life. However, after listening to Genki, he has learned to care more for others. A clan of Dinos commanded by Moo killed off Tiger's pack, so he joined up with Genki's team in hopes of finding and defeating Moo. Tiger is extremely fast and powerful in battle. He uses an array of swift attacks, as well as firing electricity from his horns and using ice-based attacks. Tiger once had a younger brother named Gray Wolf. They lived together as orphaned pups. Eventually, they built a pack of mixed-breed Tigers. When Tiger first met Moo, the giant monster killed every last member of Tiger's pack, and kidnapped Gray Wolf, leaving Tiger to die. Tiger would later find out the cold, harsh truth of what happened to his brother. Tiger was the Phoenix's anger. {Wikipedia}

The eye on a leg is Suezo 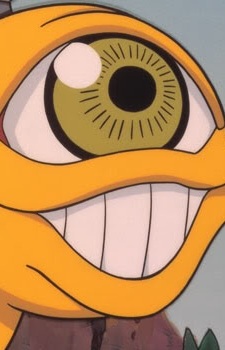 A simple monster with only a mouth, a huge singular eye, and an upright tail. He is Holly's loyal monster retainer. Suezo serves as comic relief in many instances and he can be a little obnoxious and loud-mouthed. He has amazing Telescopic vision and can teleport himself and other objects from one location to another in mere seconds, though it took a bit of practice to perfect this. Thus, eventually a very useful asset to the team. Suezo was the Phoenix's pride.

Not the answer you're looking for? Browse other questions tagged monster-rancher or ask your own question.