What does Ikumi mean by "Sand that looks like it's from Koshien"?

In the anime Jinsei - Episode 2, a boy asks them advice on what to give his friend as a Birthday present that doesn't come off as cheap. 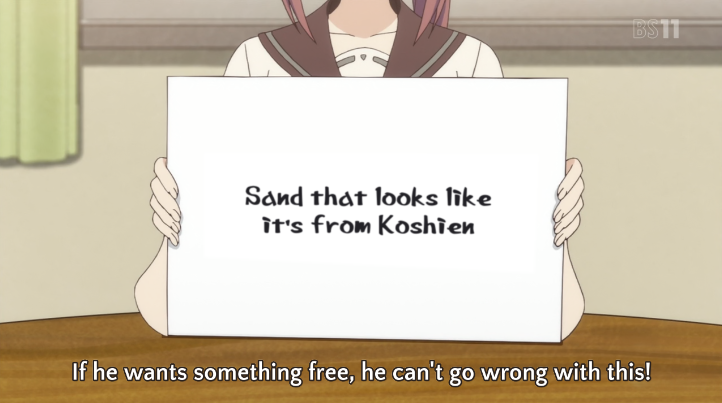 I googled Koshien and all I was able to figure out was that it's a Baseball stadium built for High School tournaments. Does this mean that Koshien is a very important place in Japan? But even if that is so, why sand?

I hope someone can explain this to me. Thanks!

Koshien Stadium is the site of the finals of two national baseball tournaments for high schoolers in Japan (referred to as "Spring Koshien" and "Summer Koshien"). Making it to Koshien means that your team is extremely successful, one of the best in the country. Making it to either of these is a dream for many Japanese high schoolers who play baseball. Players who make it to Koshien often have successful professional careers after high school. In addition the sand from Koshien is literally a sacred object in Shintoism (there is a shrine outside the stadium). Losing teams at Koshien are allowed to take a bag of the sand home as a souvenir, which is to teach them the value of earnest effort even in defeat and supposedly holds life lessons.

As such, for many Japanese high schoolers, Koshien (and anything associated to it, especially the sand) is something of a dream. Baseball is one of the most popular sports in Japan, and these tournaments are famous enough that almost every Japanese person would know them and understand this reference.

For a sports-fan like Ikumi, this seems like a perfect present. The fake Koshien sand is actually quite cheap, but it seems valuable given the history and tradition.

According to japanvisitor.com, the sand at Koshien Stadium is considered sacred:

One of the enduring images of any day at Koshien is the winning team bounding over to their cheering section to celebrate while the losers cry bitter tears of defeat, beating the walls and falling to their knees, digging the sacred Koshien sand to remember their day by. As long as there are boys who dream of glory there will always be Koshien.

The sand at Koshien is sacred. I mean that literally; the ballpark is considered sacred ground under the Shinto religion, and there's a shrine outside the ballpark to that effect. Losing teams are allowed to take a bag of the sand home as a souvenir. After the game, look for shots of the losing team emotionally gathering earth up.

Also baseball represents the best qualities found in Japanese sports like a self-disciplined work ethic, teamwork and resilience. These qualities are also valued not only in sports but in life too. Since Koshien Stadium is host to a couple of nationwide events in baseball, being a member of the team who is on the grounds and plays would be a great honor and if you don't win first place, the sand or dirt would be proof of your time there.

Not the answer you're looking for? Browse other questions tagged jinsei .