I'm looking for the title of an anime I've watched several years ago (I think the anime should be from 5 to 10 years ago). I don't remember much about it, just a few scenes from the first episodes. I think it was some short anime series (12 to 26 episodes).

I remember the main character getting his power form something like a blue blob that wrapped around his arm (making it somehow looks like Chad's arm from Bleach).

There were also other people getting powers (or weapons I don't remember) in a similar way. In particular I remember a fight with an evil guy in a park who was trying to kill random people there.

The story was set up more or less in the present.

Adapted from the 2005 adults-only superhuman battle action visual novel game Ayakashi. Ayakashi is a parasite life force that gives superpowers to its host, taking in return the host's entire life force. Kusaka Yuu is a student that lost his will to live after the death of a dear childhood friend, until the day a mysterious girl, named Yoake Eimu, appears. From that moment on, his life would never be the same again. Hunted by Ayakashi and their hosts, the power within Yuu awakens and a never ending battle begins. 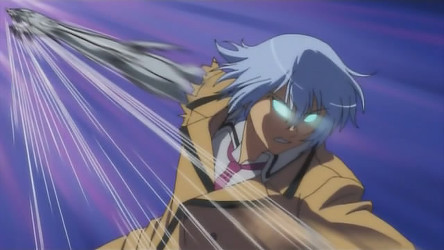 Yuu KUSAKA in his OP mode.

In episode 2, an evil guy killed many random people in a park and harmed Yuu's classmate in order to provoke him and awaken his powers. He got totally pwned by the enraged protagonist.

Not the answer you're looking for? Browse other questions tagged ayakashi or ask your own question.