What factor led Zoro to accept Luffy as Captain?

Why does Zoro respect Luffy? When they first met, he wasn't really pleased about Luffy. Zoro was always quite a loner, even now in the crew. Does he accept Luffy as his captain because of his dream? Or because he is stronger than him? (even though their strength is similar, I think Luffy is still stronger)

On Thriller Island, we saw how big his support for his captain was, when he took all the pain, to save them all! 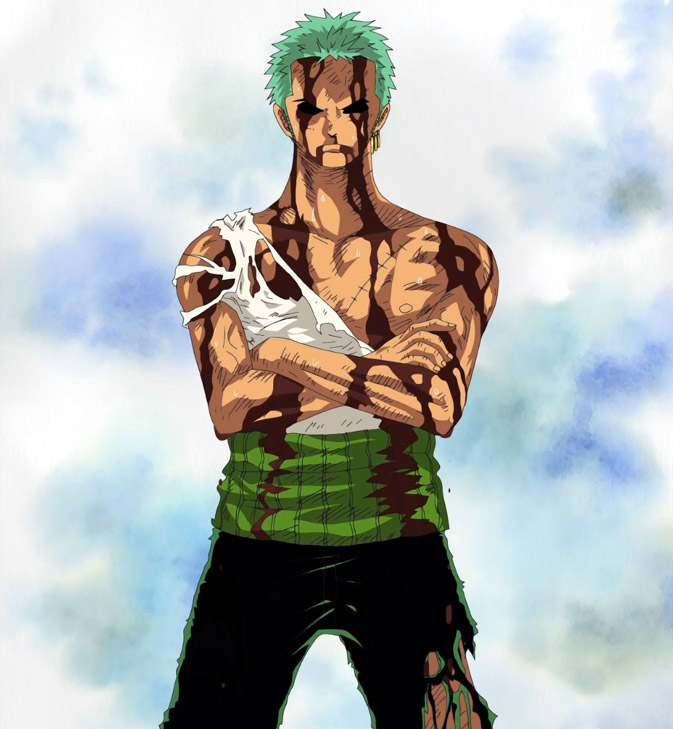 I just rewatched the beginning and it makes is surprising clear. At that time everyone knows who Zoro is, it is implied Zoro could kick Luffy's ass, and everyone looks down on Luffy until they get confused by his devil fruit power.

Zoro is a demon.

Zoro is however a very honorable demon. He signs (figuratively) a contract to torture himself to protect someone he views as innocent from someone he views as completely dishonorable. He follows that contract twice: once to honor the efforts of the girl he was protecting after the vermin mistreated her; once when the vermin clearly broke their contract.

He, while powerless, signs a contract with Luffy. As long as Luffy frees him and supports (or more accurately does not get in the way of), Zoro's dream to become the worlds greatest swordsman, Zoro will be part of Luffy's crew. Even when Zoro finds out that Luffy doesn't really have a crew at all, he shows a ting of apprehension but no willingness to break his contract.

As time continues, Zoro increasingly grows to respect Luffy above and beyond the requirements of his contract. He will not leave Luffy, however, unless his contract is broken. This would have likely occured if Luffy was not strong enough to proceed into the New World and provide Zoro the opponents he needed.

I guess when you make a contract with a straight shooting demon, expect him to follow through in incredible ways.

I guess he accepts him as captain because of his kindness, when he was about to be executed, the soldiers hold up their rifles and open fire, and Zoro thinks how he cannot die, and remembers Kuina. However, before the bullets can reach them, Luffy leaps from the Marine base and uses his rubber body to block the bullets and send them flying. When Zoro is shocked and asks who he is, Luffy responds that he is Monkey D. Luffy, and that he will become the Pirate King.

He wants to help Luffy to become Pirate King not because he asked him to join the crew but he was willing to help and to meet Dracule Mihawk while they're sailing .

It is his trust in Luffy and Luffy's dedication to his dream. He believes Luffy has what it takes to be a Captain.

This can be seen when Luffy fights Usopp. Luffy had to beat Usopp and leave him, which was very hard for Luffy to do, but Luffy does it as a Captain. Zoro remarks that it's the burden of the Captain, and the rest of the crew relies on him to bear it (read more about it on the wikia).

The fact that Zoro cannot bear Luffy's pain (as depicted above) is why he will never be the Captain. Besides, why would he want himself as the Captain, if he is the one who joined Luffy's team? By so doing, I think he is fully aware that the Captain of Luffy's crew is Luffy himself.

14
Why can't Zoro cut Seastone?
4
What happened in the fight between Zoro and Monet?
1
Are Logia types overpowered?
6
Why were Luffy, Zoro, and Usopp surprised when they saw the Dragon from Punk Hazard?
3
Who is captain Jack?
13
Why didn't Luffy and Zoro fight back against Bellamy in Mock Town?
9
What are the similarities between Gol D. Roger and Monkey D. Luffy? Are they related by blood? What are their relatives' ages?
2
Is Law stronger than Zoro in sword technique?
2
What did Jinbe lose in Charlotte's roulette?