What happens to the drones at the end of episode 6?

At the end of the sixth episode of Jinrui wa Suitai Shimashita the two drones in form of black panels have handles attached to them and placed in a wooden shelf with a note near them saying "1 hour of winding = 1 minute". It's not very clear from the characters' lines what this all means. 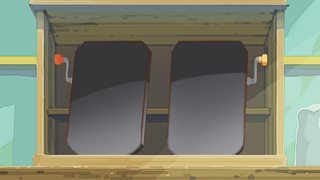 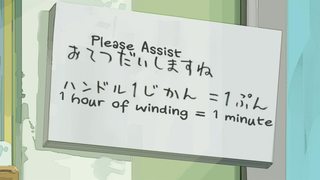 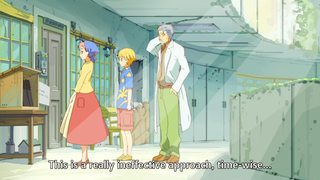 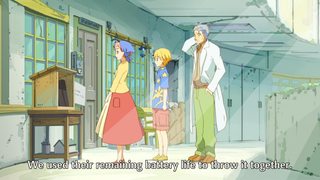 Can't drones recharge from electric sockets? I thought Pion just did at the beginning of the episode? Why resort to manual winding mechanism? What's really going on?

Okay, I was a bit confused as well, but I think I know what happened at the end. So that Pion and Oyage could stay on Earth instead of going back into space, the main character (Watashi) destroys the electric generator, their only source of power. Near the end, Pion and Oyage are at about 15% power. So, Watashi converts their batteries into wind-up batteries to get past the electricity problem. As said on the sign, 1 hour of winding= 1 minute. They're still okay. :)

And, if it helps, Chris Seibenmann on https://cks.mef.org/space/rtblog/anime/JinruiChronologicalOrder provided an explanation on the timeline of Jinrui wa Suitai Shimashita, and the episodes go: 12, 7-8, 5-6, 1-2, 9, and ending with 3-4. This explains why you don't see them anymore, because the later episodes are flashbacks, albeit episode 9.

Not the answer you're looking for? Browse other questions tagged humanity-has-declined or ask your own question.

4
"I want to forget the little nuts"
5
Why did the skinned chickens fear the camera?