Who was it that Sora fought in Hallow Bastion?

In Kingdom Hearts 2 when we are seeing Sora's memories there is a scene where we see Sora fight someone where he, Donald and Goofy fought Maleficenct's Black Dragon Form. the figure is wearing a black coat, much like those worn by Organization XIII.

this scene was not included in the original release of Kingdom Hearts but in the Japanese only Final Mix version which has now been localized in 1.5 HD Remix. in it this scene is apart of an optional super boss battle which the boss titled "Unknown".

a reference that when Sora was restored from a Heartless he is still missing the part of him which became his Nobody, Roxas.

Since Unknown must be a Nobody and resembles one of the members of Organization XIII, i am wondering if it's revealed anywhere who Unknown is (given that Unknown's fight is the only optional Superboss we see in Sora's Memories)

According to this wiki its was Xemnas

A few days later, for reasons unknown, Xemnas arrived at Hollow Bastion. Being told by the Princesses of Heart of the power that they sensed while on his way to seal the world's Keyhole, Sora, Donald, Goofy, and Beast go to the abandoned area where they fought Maleficent to investigate, and soon encounter Xemnas. Intangible at first, Xemnas passes through Sora, causing him to experience many of his memories in rapid succession, before fully manifesting. Sora asks who the man is, and Goofy wonders if it is Ansem, and though Xemnas says he is familiar with the name, he refuses to clarify his identity. He then launches an energy attack at Sora, who manages to deflect it (with some difficulty). Xemnas remarks how Sora looks like "him" and thus an incomplete being, his words only confusing Sora. Xemnas then attacks the Keyblade wielder, intending to test his power.

That scene was also include in Kingdom Hearts Final Mix which was originally released in japan.
You can also see identify its Xemnas by the same weapon he wield. 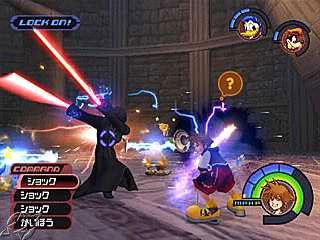 Not the answer you're looking for? Browse other questions tagged kingdom-hearts or ask your own question.