Law cut Vergo into two in one hit on Punk Hazard. 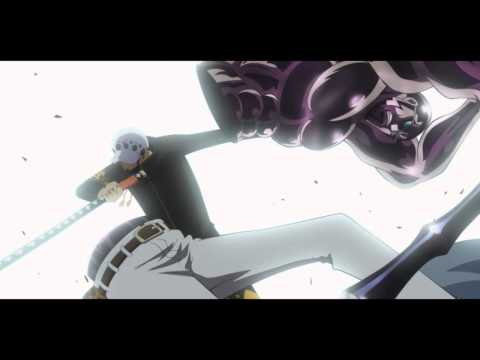 As far as I know, Haki users can block Devil Fruit attacks. The best example was when Rayleigh fought against Kizaru, in which he easily countered Kizaru's sword with his Haki.

Law didn't just use his power to cut Vergo, he also cut him with his sword as part of that. The combination of Law's power, his sword, and the Haki he used through his sword, were enough to overwhelm Vergo's full body Haki and slice him in two.

Haki is not a binary quality. Depending on the willpower and the strength of the person, they can have stronger or weaker Haki. If Law's Haki had been too weak, he wouldn't have been able to cut Vergo. However, if he used as much Haki for his attack as Vergo used for his defense, then it would just become a contest between Law's sword and Vergo's abs.

In One Piece, there are very few absolute powers. Luffy was able to punch through the Snake Sisters' Haki by putting enough forces into his punch. No one is immune to Haki, but Haki is not infallible either. Haki can be beaten by Haki, and weak Haki can even be beaten by excessive force.

In this case, I believe it was a combination of Law's Haki and strength that defeated Vergo's Haki and toughness.

Haki isn't almighty. Pure strength can still overcome even Haki. The best example we have seen so far is when Luffy was able to punch harder than Boa Marigold could coat herself in armament Haki in chapter 520. This was at the time when Luffy didn't even know how to use Haki yet.

From this example, we can see that one doesn't need Haki to overcome Haki. The same goes for Law. The combination of Law's power and his slash were more powerful than the power Vergo could ever summon to defend himself with.

Oda added this scene to prove how strong Law had become. He wasn't the weak psycho child he once was. He had grown to be pretty strong and was determined to defeat Doflamingo, and he showed us by defeating Vergo, who supposedly had a pretty strong Haki.

5
Haki vs.Venom Venom Fruit
4
Haki against Jewelry Bonney
1
Are Logia types overpowered?
3
Does Haki also eliminate Devil Fruit users' weakness against water?
3
Did Ace master any Haki abilities?
2
Does Devil Fruit taste bad?
2
Is Law stronger than Zoro in sword technique?
3
Does using Devil Fruit powers drain the user's stamina?
3
Can the effect of a certain devil fruit last through the effect of another devil fruit?
0
How did Aokiji survive Whitebeard's attack; observation Haki or something else?