What does Tomoko mean by “Is he Kenshi***?” [duplicate]

In Watamote Episode 9, Tomoko is angry at her little brother and says:

Does he have to be better than his big sister at everything? Is he Kenshi***? That bastard! 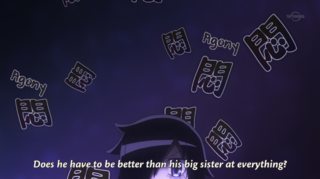 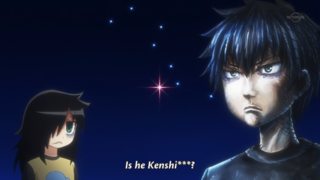 What does she mean by Kenshi***?

Found it thanks to this: What are these three references from episode 9?

Kenshiro is the main protagonist of Fist of the North Star Manga/Anime series.

The Big Dipper asterism in the background is a reference to the seven scars on his chest that look like it (where as the Big Dipper is also directly above the North Star in the sky):

Kenshiro is also known as the Man With Seven Scars (七つの傷の男 Nanatsu no kizu no otoko?), due to the seven scars engraved on his chest patterned after the shape of the Big Dipper (the symbol of the Hokuto school), as well as the Savior of Century's End

7
What are these three references from episode 9?

11
What is the little doll on top of Tomoko's phone?
14
What series was Tomoko talking about?
9
What is the drawing on Tomoko's shirt?
7
What are these three references from episode 9?
3
Is this the correct translation of what Tomoko is saying?
4
Why is Tomoko actions on her computer so exaggerated?
1
What is this cutting instrument Tomoko has, and is she supposed to have it at school?