Who is this third character and what is her connection? [closed]

I have had this image for a while now 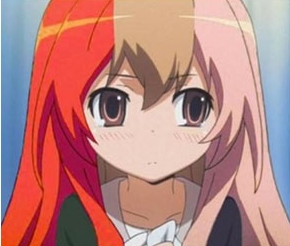 I know the brown hair in the middle is supposed to be Taiga Aisaka from Toradora and the pink hair on the right is Louise de La Vallière from The Familiar of Zero, but who is the third character with the red hair on the left? And is there some sort of connection between all 3 characters who are in different anime to make them almost look identical? (e.g. the light in the hair and the face seems to match perfectly yet the shirt on either side doesn't)

I think she looks like Shana from Shakugan no Shana 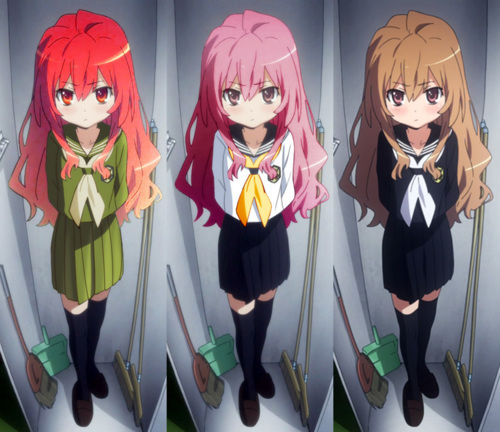 The reason of why they look similar probably because (as @LoganM says) J.C. Staff is rather lazy with this kind of thing. They also have similar art and animation style among their series even when they have different Character Designer.

To expand on Shinobu's answer:

These three (Shana, Taiga, and Louise, in that order) are commonly referred to as the "big three" tsundere characters. They each take a different perspective on what "tsundere" implies, but are the "guideline" characters when creating a tsundere.

These characters were all voiced by Rie Kugimiya, who has probably voiced the most tsundere characters of any voice actor.

Sometimes, due to fan's personal opinion, the "big three" is stated with other characters, often from Rie's portfolio. Common replacements are Nagi (Hayate the Combat Butler), and Aria (Aria the Scarlet Ammo).

However, it is generally accepted that the three listed earlier are the "big three", irreplaceable even with the passage of time. (Since fans have decided that "tsundere" is defined by the three's combined personality, and not the other way around.)

To dive into the strange side of anime for a moment; the "fans" I have been referring to are mostly those gathered around the TsunDere GiRlS RuLeS facebook page, and the corresponding wiki, http://tsunderegirlsrules.wikia.com.

(As a side note, Shakugan no Shana is well worth watching. (My favorite anime.))

Not the answer you're looking for? Browse other questions tagged toradora the-familiar-of-zero shakugan-no-shana or ask your own question.

3
Can someone tell me what this song from episode 38 of Zero no Tsukaima is?
3
What is the name of the violin song during the first and last episode?
5
What "thing" were Taiga and Ryuuji talking about in Episode 1?