Why do guys in anime often lack nipples? 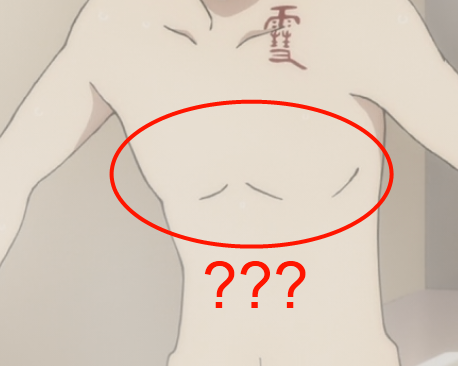 As shown in the images (from Free! and Noragami, respectively), guys in anime often lack nipples. This could be explained by vague Japanese copyright laws, but other anime occasionally show guys with nipples. Why do guys so often lack nipples?

Animated male nipples are not a matter of legal Japanese censorship (or copyright law). It is fine to air them on TV in prime time. As Ray noted in a deleted answer, Dragonball, viewed as a most-typical shounen anime aimed at children, features male characters whose nipples are easily visible. Although the series garnered many adult and female fans, the characters are not particularly intended to look comely or provocative to the target audience. The innocuous nipples in Dragonball can be there because they are not intended to be viewed as attractive.

Free! is a bishounen (pretty boy) title, so the characters are intentionally drawn to be eye candy. Even more so than the earlier bishounen anime series, Free! and other more recent titles such as Binan Koukou Chikyuu Bouei Bu Love!, Uta no Prince-sama, Harukanaru Toki no Naka de, Kiniro no Corda, Dance with Devils, Diabolik Lovers, Brothers Conflict, K, Kamigami no Asobi, Starry Sky, Shounen Hollywood: Holly Stage for 49, etc. focus heavily on the eye candy aspect, such as including stages of undress, characters striking sensual poses, “camera” angles and lingering shots that accentuate their figures, etc. The character design is intended to garner fans who crush on the characters and buy all manner of merchandise sporting those characters.

Bishounen characters are not as prevalent in shounen titles as in shoujo, but they are now widespread (f you look at the bulk of shounen series from the 80s, 70s, and 60s, you will find far fewer bishounen characters there, especially as primary protagonists), partly based on changing cultural preferences (something along the lines of metrosexual) and partly on expanding otaku demographics (pulling in the potential female audience can be more financially-viable than it was in the past). Noragami is not marketed toward women, but it follows in the current trend within shounen series of those that try to appeal to readers/viewers beyond the target demographic.

Historically, the naked body was not considered to be attractive in Japanese culture. The classic Heian era (11th century) novel The Tale of Genji illustrates how people wore layers and layers of clothes (women wore 12 layers), and had sex while (nearly) fully dressed and in the dark (see pages 30-32 of The Tale of Genji by Murasaki Shikibu: A Reader's Guide by William J. Puette). Some consider the origin of bishounen to date as far back in Japanese literature as the protagonist of The Tale of Genji (i.e. Hikaru Genji as the proto-bishounen). Genji was the era's ideal man. He considered imagining his lover without looking closely as preferable to viewing the unattractive details of her actual body.

The lower image shows a low-definition scene. The shading is very basic. See how few strokes there are drawn forming the general shapes of the objects? In such scenes, every line counts and you don't want to draw anything too complex that would steal the viewer's attention. On the contrary, in detailed scenes you can see even the tiniest details.

Can't really say what the anime director thought when he decided to drop nipples from the top image, but I think it was something along the lines of "Huh, nipples look weird in this scene. Let's remove them". The contrast between sunlit skin and shadow is very high, so nipples would really stand out in this particular lighting.

Also I'd like to explicitly mention one of the most obvious reasons (in response to the three downvoters who left no comment):

Nobody wants to see men's nipples in regular anime.

I don't really think it's about toning up or down per se. Sensualization/sexualization of both genders in anime is part of the goal for sales, they even throw in fanservice (obvious enticement scenes) at times. But perhaps it's about the nipples themselves, even of males, that are seen in a particular light which doesn't translate the same across cultures.

Perhaps what is kind of opposite of not showing nipples in Japanese anime/manga is actually having anatomically correct nipples on Batman's costume starting in the Tim Burton movie era and later. Ask yourself, why are there nipples on Batman's costume? Maybe the intention here is to go more for the sexual "eye candy" appeal in the character even though no clothes or costumes that I know have either have nipples or have a need for nipples.

14
Why do many anime OPs and EDs have onscreen lyrics?
20
How old is the snaggletooth trope?
5
Why is the childhood friend trope commonly seen in anime?
12
Why is the "drinking milk" trope so prevalent in anime?
1
Oblivious life-threateningly terrible cooks?
1
What is the meaning behind dark works often taking place at midnight?
13
Why do anime girls have huge chests?
6
Why do anime mothers often get the short end of the stick?
3
What is the trope of a leader being overburdened with paperwork, and is it specific to anime?